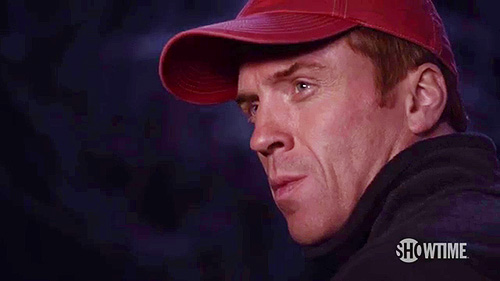 ShowbuzzDaily has an early review of the Homeland pilot (parts of which have since been reshot).

Pay TV networks, and Showtime in particular, thrive on hot-button concepts for their original programming. They’ve given us a serial-killer hero, heroines who are variously drug kingpins, schizophrenics and addicted nurses, and both gay and lesbian soap operas. With their new HOMELAND, which begins its run October 2 after the season premiere of Dexter, they’re broadening the network’s footprint to include a topical political thriller.

The show is based on an Israeli series called Prisoners of War, Americanized by 24 veterans Howard Gordon and Alex Gansa (with the Israeli creator Gideon Raff) to draw on the Iraq war rather than the Palestinian conflict. Damian Lewis plays Scott Brody, an American who’s been missing and presumed dead for 8 years, miraculously rescued alive in a raid on an Al Queda stronghold. But is his survival really a lucky fluke? CIA analyst Carrie Anderson (Claire Danes) has her doubts–she tells her superiors, who include mentor Saul Berenson (Mandy Patinkin), that a Iraqi prisoner had told her Al Queda has a deeply undercover American double agent, a POW that they’d turned to their side. Carrie thinks Brody may be that secret terrorist–but she has her own issues, including bipolar disorder and a history of making trouble at the Agency. Is Brody a hero or a sleeper agent? Is Carrie’s suspicion about him a product of her brilliantly gifted abilities, or merely paranoia bred by her instability? That’s the series.

There’s a soapy aspect to the story as well: Brody’s wife (who has been recast, almost surely for the better, with Morena Baccarin, of V and Firefly renown) hasn’t been a nun while her husband was believed dead, and naturally her lover was Brody’s best friend Mike (Diego Klattenhoff). Carrie, meanwhile, has an engagement ring that surely has some history attached to it, not to mention some inappropriate Agency relationships.

Homeland has a provocative premise, with the prospect of tensely heightened face-offs between two superb actors in Lewis and Danes, each of them playing characters who may or may not be trustworthy. The problem it faces as a continuing series is that there’s really only one crucial issue presented in the pilot, and while the writers find a tantalizing way to end that episode, for how long can they sustain the question of is-he-or-isn’t-he? Even the pilot itself (directed by Miguel Arteta, a veteran of Dexter among other shows) feels a bit padded, with much footage of Danes intently watching surveillance footage. At some point, the series will have to tell us what side Brody is on, or risk going around in circles endlessly. Homeland’s Sunday night slot is a highly competitive one for cable TV, as we’ve noted before–Showtime will face opposing shows this Fall on CBS and ABC, as well as HBO, AMC and probably others. For now, the show certainly earns our early attention.