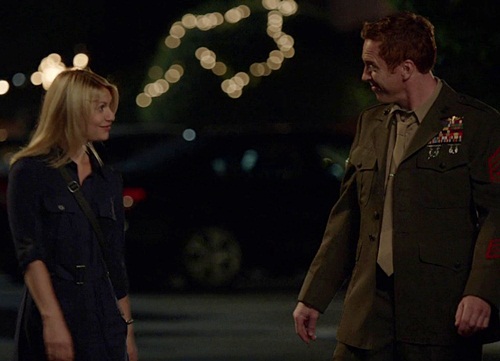 For a born and bred Brit, Damian Lewis has carved out a remarkably steady career playing dyed-in-the-wool Americans, memorably in Band of Brothers and on Life (he’s slated to play Union general James B. MacPherson in the upcoming Civil War mini-series To Appomattox, too). He’s added another super-convincing tortured good old boy to his résumé as Marine Sergeant Nicholas Brody, the possibly turned, ever-mysterious ex-prisoner of war at the center of Showtime’s Homeland, which stars Claire Danes as the CIA agent who’s onto/into him. On a hectic press day in Manhattan, Lewis spoke to Vulture about playing Brody, his rock-star fantasies, and filming disturbing sex scenes.

I understand you’ve had a crazy busy day?
I was just feeling a bit hung-over from last night and had to get a coffee. Weirdly we had our wrap party last night, before we wrapped the season. So yeah, I sang in a rock band last night. You’d have been very happy with it. It was pretty impromptu, we realized we had a bunch of musicians in the crew, got together for one rehearsal, and played the wrap party as our gig. I want to be a rock star so badly; it’s very intoxicating to be drunkenly singing at people like that.

I’m sorry to have missed that. So, last we saw you, Brody and Carrie [Claire Danes] just drove off into the sunset. There’s totally going to be a happy ending now, right?
Yeah, as you can tell from the style of the show, everything will be resolved now and it will turn into a romantic-comedy road trip. [Laughs.] You’ve seen their teenage moment in the back of the car …

That’s one way to put it.
Oh, now we’re just being coy with each other. [Laughs.] I think one spine of the show is clearly: Is Brody or is Brody not a terrorist. And if he is, will Carrie catch him in time or is she in fact a little crazy? But I also think a strong central spine is this Casablanca-like relationship these two have, not being able to be with or without one another.

The chemistry between Carrie and Brody used to seem palpable but vague. Now … it’s not so vague anymore. Do you think there’s really a connection between them, or is each playing the other?
I think Carrie consciously places herself as a honeytrap and is surprised by her connection to the man she’s supposed to be surveilling. And it’s also in keeping with her slightly reckless nature, that she maybe has problems with boundaries. In Brody, he is excited and woken up by this connection he has with a woman, that he’s struggling to regain with his wife. They’re two broken-winged birds who recognize the damage in each other. Brody knows Carrie is intuiting something about him that no one else is, and she is crossing all sorts of professional lines by becoming emotionally engaged with a guy who’s a possible breach to homeland security. It’s wrong on so many levels, but it’s deliciously right as well!

Read the full interview at nymag.com.