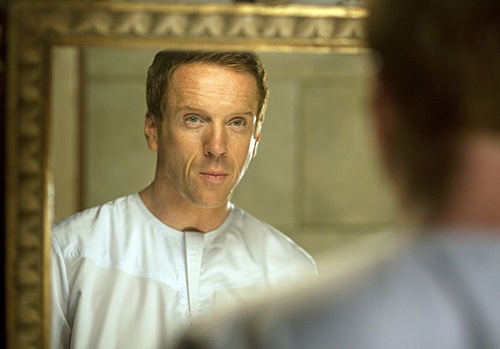 In Britain, Damian Lewis is known as a stage actor and star of low-key television treasures such as The Forsyte Saga and Friends and Crocodiles. But over in the US, he shot to fame in the Steven Spielberg-produced Band of Brothers. After starring in cop show Life, he was nominated for a Golden Globe this year for his role in Homeland, a psychological thriller in which he plays Marine Sergeant Nicholas Brody who, after eight years in captivity, may be a sleeper agent for al Qaeda.

This is a tough role: Brody is tortured during captivity and may be a security threat to America. Did the producers let you know what you were getting yourself in for? They were very open that they were offering me a controversial role in an ambitious project and about the fact that he was more than likely going to be a threat – in fact, the danger had to come from him; otherwise the series falls apart.

Did you do research about prisoners of war who had been tortured? Yep, there were three prongs to my research. I went and researched mosques and spoke to my local imam, and went to witness prayer and learnt the history of the religion. I also researched post-traumatic stress disorder – I’d actually been to a unit before where people who are recuperating from PTSD. And then I read about prisoners of war. Brian Keenan had written a very compelling account – he’d been a prisoner in Beirut in the 80s. So there was a lot of source material.

You played a soldier in Band of Brothers, and a detective in Life who had been in prison for 10 years. Did that help when you were preparing for the role of Brody? Band of Brothers much less so, actually, because they have such different psychological makeups, Brody and [Major Richard] Winters. Band of Brothers was all about the art of leadership and soldiering and the extraordinary accomplishments of Easy Company, who helped liberate Europe. There are more similarities with Charlie Crews in Life – these two men are both released from prison after a long time and are rebirthed, if you like, and given a second chance at life. There the similarity really ends, because Crews was given a $50 million settlement, nice cars, nice suits and women if he wanted them. Brody is left in an altogether darker place – it’s not fantasy.

Yeah, you’re not playing Brody for laughs. No, not this time, although I’m looking forward to Homeland the Musical.

Do you think the series made Americans think about their foreign policy? There’s a much greater introspection in America. I’ve worked there a lot in the past five years, and I see a more self-analytical side to America, and Obama as the president embodies that. There’s been a massive sea change – for the good, I would argue – and the politics of the show tap into that. I think politically, if you wanted to use labels, it’s a liberal show, it poses these questions – what defines terrorism? There’s terror perpetrated by military groups and then there’s state terrorism.

More than 10 years after 9/11 was it the right time to explore these issues? [Producers] Alex [Gansa] and Howard [Gordon] have said publicly that they weren’t sure if there was an appetite still for this kind of thing, but even though it doesn’t dominate the papers in quite the same way, everyone knows there are different rogue elements that have sprung up everywhere now. It’s created almost more uncertainty and I think that’s what the show taps into. And it taps into uncertainty of our own governments and the way in which Western governments went about advocating the war on terror. It’s massively symbolic that a US marine might be enraged enough by what he sees and what he’s being asked to do that he finds cause to switch sides. It’s real and particularly alarming and I think that’s arresting for people.