Flipping the Dynamic that Billions was Built On 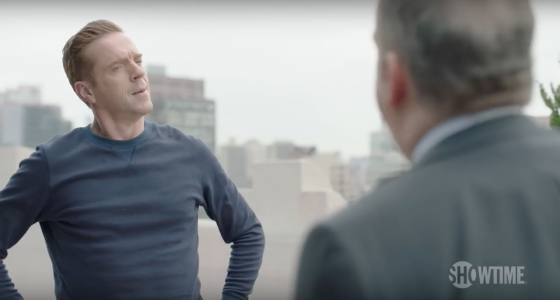 Chuck Rhoades and Bobby Axelrod still have a billion problems, but their long-standing rivalry is no longer one of them…for now.

When Billions returns on Sunday for season 4, Chuck (Paul Giamatti) and Axe (Damian Lewis) find themselves in a new position: drinking buddies and cautious allies. This new development in the relationship will surely be welcome considering they’re each dealing with more than enough: Chuck is out as U.S. Attorney and his run for governor was shelved following the threat of his unorthodox sex life coming to light, while Axe is determined to bring down his former protégé Taylor (Asia Kate Dillon), who has struck out on their own.

With plenty of political maneuvering and money trading ahead, EW talked with Giamatti about flipping the dynamic that Billions was built on.

ENTERTAINMENT WEEKLY: Where do we pick up with Chuck? Last we saw, he lost his job and his planned run for office was thwarted.
PAUL GIAMATTI: He kind of thwarted his own plan to run for office. Well, I suppose he was both thwarted and thwarted himself. He’s opened a private practice, but that’s not satisfying him, so he’s looking to build his reputation back up and to get his high-powered career going again. He’s got this alliance with Axelrod that will prove fruitful and helpful, but they’re both pretty shifty guys, so one doesn’t know how long that will last.

What should we expect from that relationship? I have to imagine there’s still plenty of baggage.
There definitely is. There’s a sense in which they identify with each other. There’s a certain amount of conceding that they’ve been staunch rivals and a recognition that they’re similar guys, and that’s the way in which they connect. But they’re always looking out for their own interests. Wherever it goes, it’s definitely been made more complicated. It’s a different sort of rivalry now, if the rivalry does, in fact, reassert itself.

And where do things stand at home between Chuck and Wendy (Maggie Siff)?
It starts okay, but she goes to some complicated places this season. I play a very crazy political card during the middle of the season that’s complicated for her, and then she gets involved in some stuff that is complicated for me. There’s a lot of fallout from it. Everyone’s always doing something self-subverting on the show. They kind of step on their own d— all the time.