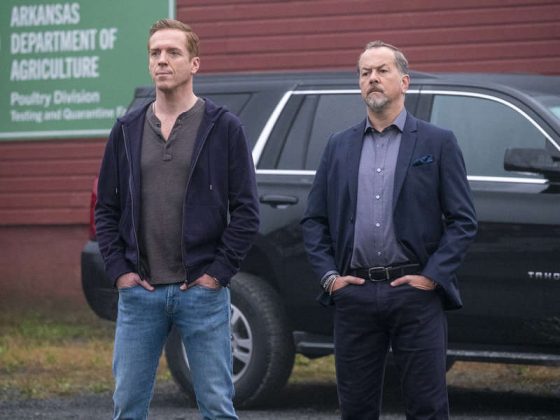 Now, this is the Billions that I tell everyone about, the show that I can’t stop raving about when someone asks me what I’m watching or to name one of my favorite shows on TV. Don’t get me wrong, the first two episodes of this season are solid, especially the premiere, but there’s always that one episode early on that really kicks things into high gear. It’s an episode that sees the dialogue firing on all cylinders, the shifting relationships starting to clarify, and the plot starting to take shape in some truly fascinating ways. “Chickentown” is that kind of episode.

It all begins with Bruce Springsteen’s “Atlantic City” and a very large man riding a scooter through a chicken farm. It’s like the beginning of a strange procedural, where we get the cold open that isn’t explained until a little bit later. You see, the man on the scooter is “The Chicken Man,” and not the one from the song. He’s key to something big that Dollar Bill has stumbled on (or slept his way to). Dollar Bill has all his eggs in the Chicken Man’s basket (sorry). On Billions, it’s never good to have all your eggs in any basket.

We’ll get there though. First, we need to check in with Axe’s passionate attempt to ruin Taylor Mason Capital (TMC) forever. Hall informs him that they can’t quite hack into the computer system the way they’d hoped—Hall insists Taylor’s guy is very good at his job—but he does have a flash drive that contains some information about positions the hedge fund is looking to take. For now, that’s enough. Wendy suggests using that information to make very small moves that will remove a few percentage points from the profits of TMC, a strategy that will mess with the head of a perfectionist like Taylor. “Slow water torture. Drip, drip, drip,” she says. “If you ever get tired of working for him, call me,” says Hall. You know you’ve crossed into shady territory when Hall loves the work you’re doing.

Taylor is unfazed by Axe’s move. They recognize that it’s designed to get in their head. “It worked…for a minute,” they say, before deciding to move on and come up with a counterattack of sorts. What’s interesting is that this counterattack involves Taylor’s father Douglas, who’s visiting the office at the time. Taylor’s father seems to be a brilliant mind like Taylor, though stubbornly unable to accept them for who they are. He uses the wrong pronouns and rolls his eyes at Taylor’s attempts to explain that it’s a sign of respect not a call for attention. Nonetheless, the two seem to have a bond when it comes to mathematics, so they set about creating a derivative that will battle against Axe’s moves.

But, back to the Chicken Man. Dollar Bill brings what he believes is a sure thing to Axe: the Arkansas Chicken Index is essentially the way the price of chicken is set, based on the number of chickens there are to sell. The thing is, this Chicken Man on the scooter is a lazy dude. There are lots of chickens, but he doesn’t go around to the farms and count. He just calls them up and asks for numbers. The company gives low numbers, and prices remain high. Dollar Bill knows that he can use this information for a huge gain, and Axe is on board. Dollar Bill never loses.

That is, he doesn’t lose until the chicken report is suddenly delayed after Axe Capital has already confirmed its massive position. Dollar Bill goes to Arkansas to find out what happened, and he finds the Chicken Man dead (and not blown up in Philly). Axe tells Dollar Bill to find out who the replacement is and buy them off before they lose a hell of a lot of money. He does just that, but there’s a problem: there’s now a whole chicken team, seven Chicken Men in total. A flock of Chicken Men, if you will. Bill knows he simply can’t convince them all.

So, he goes completely off the rails. “I have a solution,” he tells Axe over the phone, “a…final solution.” He grabs a diseased chicken from a separate quarantine farm and heads back to infect all the other chickens. Axe and Wags show up just in time to stop him. In a moment so unlike Axe, he tells Dollar Bill that not every position can be a winner, and that sometimes you just have to take a loss, especially when the opposite could lead to poisoning the food supply and killing an unknown number of people. “Forget it Bill, it’s Chickentown,” says Wags in the episode’s most ludicrous and delightful moment.

Alright, what else do we need to cover now that the Poultry Plot is out of the way? Well, there’s Chuck suddenly hitting a road bump in his plan to become State Attorney General, after he learns, through his old nemesis Lonnie no less, that an article will be coming out detailing how he refused to prosecute a company called Sugar Vape that was marketing harmful products to children, and that the CEOs are connected to Chuck Sr. Chuck does his best to get the article spiked, meeting with the editor and then telling the whistleblower that Sugar Vape will be suing him if this gets out. That works for a minute, but then Kate reverses it, telling the whistleblower that Chuck is lying and that he’ll be suing the company as an officially designated Federal Whistleblower. The article is published, and all Chuck can do is head to a party hosted by his father to meet and greet a union that isn’t thrilled to see him, all while using an elastic band around his leg to inflict pain/pleasure and keep him focused.