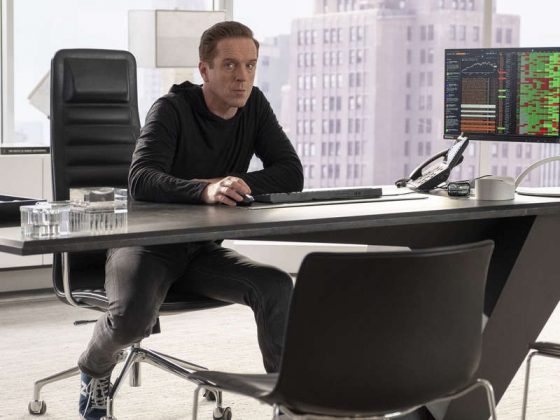 Remember last week when Mafee stormed into the offices of Axe Cap to berate Wendy, and Dollar Bill threatened to fight him? Well, that threat has become a reality. Every year some traders throw down in a boxing ring for charity, and Mafee and Dollar Bill can think of no better way to settle their feud than to face off against each other between the ropes. At the top of “Fight Night,” Sara and Wags meet to sort out all the details. They agree on glove weight, prize money—”winner take all” for their chosen charity—and make a little wager of their own while they’re at it.

“Fight Night” isn’t really about the bad blood between Mafee and Dollar Bill though. Sure, it’s a good excuse for the show to get in some training montages set to “Eye of the Tiger,” which is entertaining because both men are woefully out of shape and completely unprepared for this, but it’s all a stand-in for the higher stakes battle between Taylor and Axe. As Dollar Bill is woken up in the middle of the night to begin his training, and Mafee offloads all of his weed paraphernalia—he keeps one joint behind, just for kicks—the episode’s true story gets underway, one that sees Taylor and Axe jockeying for position, their first big battle since Taylor killed their father’s company and gave Axe Cap a big win.

It all starts out mysteriously, as Taylor enters a live auction. We don’t know why, but Taylor and Sara seem both excited and nervous about the purchase. They buy a vacant lot of some sort, but what it’s for remains a mystery. Then, Taylor goes on a popular trader TV show and rips into Axe, saying that “he’s a dinosaur” in this industry, as represented by his company’s positions on fracking, and that Taylor Mason Capital is the future. Back in the Taylor Mason Capital conference room, Taylor goes full army general, talking about broadswords and the need to stab Axe in the heart. The situation with their father was one step too far, and it’s sent Taylor into uncharted emotional territory. Mafee even notes he’s never seen them like this before, so cold and bent on revenge.

Axe, predictably, doesn’t like to be scolded on live TV. So, he books his own slot on the show so that he can combat Taylor’s move to tank his oil refinery positions. He talks about Taylor Mason Capital taking money from Russian oligarchs, and Taylor’s decision to ruin their father’s company for a profit. The thing is, Axe’s ego has played right into Taylor’s plan. They call into the show and rip Axe for exploiting 9/11 for profit, and then when Axe gets heated and wants to make a bet for the upcoming fight, Taylor turns it down. They look like the rational one, and Axe looks like an emotional goon. He knows he messed up, and that his performance will hurt everything they’re trying to do with the refineries and the fracking laws.

Sure enough, Axe’s performance brings the legislative vote to a place that’s too close to call. It all comes down to the governor, so Axe calls in a favor, getting Chuck to deliver the governor to his home so that he can offer him some money. In exchange for an important keynote speech that could predict a run for the presidency, Axe gets his vote. The fracking laws will be rolled back, allowing his refineries to make him money. The result of the vote is announced before the fight, and Axe and his team are there to gloat. But something’s off. Taylor seems happy too. They are, because the lot they purchased comes with water rights, which is exactly what you need for fracking. Taylor baited Axe into getting the fracking laws removed, and now they’re set to make a lot more money than Axe from the deal. “I taught you well,” he says. “I see that taking credit for my success in the midst of defeat is a kind of balm, so you go on ahead,” they say. Perfect. Just perfect.

That’s the true overarching story here, as Mafee and Dollar Bill’s fight is embarrassingly bad—they stagger to a draw—but there are also a few other plots popping up. Sara has fired back at Wendy for her manipulation of Taylor, reporting her to the medical board. Now Wendy’s medical license is under review, and may be revoked, a move that Taylor appreciates despite not knowing about it until after it happened. Then there’s Chuck and his father,