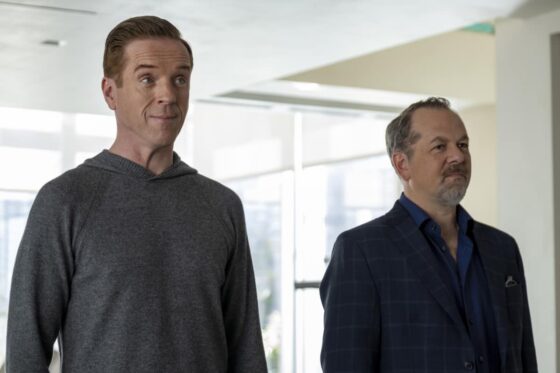 It’s time to fire up those Boomer-rock playlists, y’all, because Billions is back.

Fourteen months after COVID-19 forced Axe Cap & Co. to join the Roys in what seemed like an interminable hiatus, Tom Petty and the Velvet Underground are heralding the return of one-half of TV’s favorite venal New York billionaires.

Just kidding — although I will touch on it later. No, of course it’s how Billions seamlessly jumps right back into a story that was written before COVID put the world in quarantine a year and a half ago. Seven episodes of season five were shot before production was halted in March 2020, with five episodes remaining. (Showtime confirms that two days of filming on episode eight, “Copenhagen,” were completed prior to the shutdown.) Production was able to finally resume in March of this year, and as a way of playing catch-up, Billions has been filming both seasons five and six simultaneously. You’ll also notice a lot more one-on-one scenes in “Copenhagen” than in the past, likely owing to COVID-safety protocols.

Speaking of those one-on-one scenes, an added wrinkle to getting Billions back on our screens after such a long interlude was the untimely death of Damian Lewis’s wife and Peaky Blinders star Helen McCrory, who passed away in April 2021. But thanks to a little TV magic, Yonkers hometown hero Bobby Axelrod is still able to crush his enemies despite Lewis filming some of his scenes in the U.K.

So, does COVID exist in these new episodes? Kind of. We’d do well to place the action circa January-February 2020: The last episode, which aired in June 2020, managed to slip in a “coronavirus” mention, and there’s a telling line of dialogue in next week’s episode. But also, let’s not forget, as I echo the sentiments expressed in Vulture’s recent Succession cover story, the inhabitants of the Billions universe are so stinkin’ rich that they can probably avoid being deeply affected by something as plebeian as a global pandemic anyway.

“Copenhagen” takes place, about a handful of days after “The Limitless Sh*t,” which means we’re still knee-deep in most of the season’s major story arcs. A quick primer/to-do list, if you will:

Wendy: Get my brooding artist boyfriend to accept his wealth, but not be corrupted by it.

Taylor: Prove to my fellow millennials that I’m smarter and wiser than they are.

A handful of days has been enough time, however, for Corey Stoll’s smug deca-billionaire Mike Prince to be offered the ambassadorship to Denmark, and for Chuck and Julianna Margulies’s sociology professor Catherine Brant to have an offscreen breakup (turns out Chuck wasn’t a fan of threesomes). Whether Margulies’s departure was always planned or COVID-related, it presents the conclusion of Chuck’s Yale professorship in an organic fashion, allowing the New York attorney general to shift his energy toward the season’s third act. In addition, the conscious uncoupling gives Chuck a credible explanation for his change in appearance. (Okay, okay, Paul Giamatti is unrealistically several pounds lighter and more grey than red up top, but just as Karl Allard — played by Allan Havey — kept the conversation to Chuck’s goatee removal, so will we.)

On the subject of plagued romances, it looks like Wendy’s fling with Nico Tanner has also hit a sour patch: Tanner is enjoying the “freedom” of his newfound riches, much to Wendy’s concern (pretty hypocritical coming from someone who pulled in a $9 million bonus last year). That is, until cameo-of-the-week Jason Isbell gets all Lester Bangs in his head, reminding him that he’s no more than a commodity to the Axe Cap bros.

Meanwhile, poor Taylor is stuck in mediocre-storyline hell. They spend the episode obsessing over Rian because she, gasp, dares to have a life outside of Taylor Mason Carbon. Granted, Rian’s act of rebellion — working catering gigs to stay in her friends’ inner circle — is worthy of employment review. Rian slinging mock-tuna wraps at a Bail Project event is just bad optics for Mase Carb, because it looks like Taylor is underpaying their analyst (they’re not).

Otherwise, “Copenhagen” is a solid, albeit predictable, Billions episode, filled with plenty of red herrings up until the über-twisty final few minutes. Chuck’s big subplot involves thwarting yet another potential scandal: A student skeeved out by the New York attorney general’s directive to dig up dirt on now-disgraced Treasury Secretary Todd Krakow threatened to decorate the internet with an incriminating photo of Professor Rhoades willingly participating in voter suppression back in his Yale undergrad days. If Chuck withdraws from his Yale Law School teaching post, the photo will disappear.

What sets this incident aside from the 6,834 others is that Chuck had every opportunity to save his own ass by his usual methods of quid pro quo — and yet he decides against any of that. So even though he ultimately loses his instructor position (the Dean found out about the photo and Chuck’s student-researched takedown of Krakow anyway), he’s proud of himself for doing the honorable thing. Dean Allison Walker (Tawny Cypress) gets the last laugh, though, making Chuck persona non grata at the one place where he feels safe, Yale University.

Chuck also learns that sifting through convicts he’s put away as possible kidney donors is a really bad idea: Upon learning there’s a perfect candidate behind bars, Chuck bolts upstate, only to discover, SUCKER!, Dr. Gilbert (Seth Barrish), a.k.a. Dr. Godfather, waiting for him instead. The prisoner with the pristine kidneys? Not giving them up, because Dr. Gilbert runs this prison now. He bends both his fellow inmates and the prison guards to his will with something far more powerful than street drugs — first-rate medical care.

But I gotta say, the buildup to Axe’s “Copenhagen” double triumph was worth all the lukewarm fake outs (the Scooter-as-a-furtive-gambler bluff was kind of meh): By the end of the episode, Axe has effectively demolished Prince’s image as a nice rich guy and secured his bank charter — courtesy of a predatory lending company he purchased.

After Axe enlists everyone in his employ to excavate Prince’s past, Dollar Bill comes up with the skeleton in the closet needed to obliterate the would-be ambassador: a questionable story about Prince’s now-deceased business partner, David Fells. Fortunately for Axe, Fells’s bereaved mother, Brenda (Becky Ann Baker!), is willing to spill the tea, NDA be damned — as long as Axe covers any legal ramifications she may face. (And as long as he wisely remains silent on, you know, being able to run a MasterClass on stabbing someone in the back.)

Just before Prince scored his first billion, he tricked a strung-out Fells into selling him his stake in their company for a paltry sum so the future hygge-practicing tycoon could claim the financial windfall for himself. Axe and Brenda take the story to a 60 Minutes–esque program doing a profile on Mike Prince, and before the hit piece has concluded, Prince’s traditional Danish costume — which he arrogantly modeled at the start of the episode — is sitting in the office trash can.