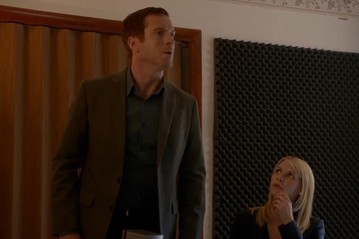 Damian Lewis and Claire Danes in a scene from “Homeland.”On the new hit Showtime drama “Homeland,” actor Damian Lewis plays U.S. Marine Sergeant Nicholas Brody, a former POW suffering from a serious case of post-traumatic stress disorder following eight years of captivity in Afghanistan. Brody, who may or may not be working for al Qaeda, is being covertly followed by a paranoid CIA agent played by Claire Danes, as the series explores complicated issues such as the price of freedom, the psychological scars of war, and the post-9/11 limits on privacy.