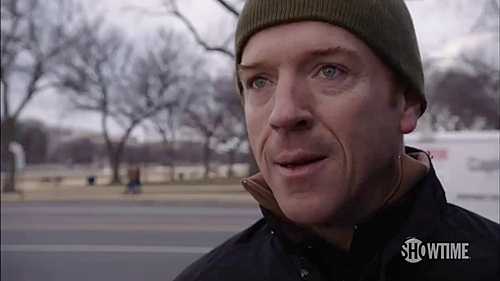 I know you can’t necessarily control this, but it seems that this is premiering right after the 10th anniversary of 9/11. There’s a pretty significant milestone for this to be coming up. Was it mapped out this way, or did it just happen?

Howard: It is just a confluence of events. It turns out to be quite fortuitous, as are a number of other things that seem to affect the way this show is going to be viewed.

Osama bin Laden was killed when we were on Episode 2, eerily like the scene of Damian’s rescue. So this sort of collision of the war on terror and the two wars we find ourselves in, is a story that has not been told about what’s the price of 9/11 to this country.

This show is very much in the wake of 9/11, but then years later. This is after Abu Ghraib, after Guantanamo, after the prosecution of two wars of questionable merit. So the timing of it is significant, accidental and fortuitous. …

We kept watching 24 because we knew there would be a conclusion at the end of that season. We’ve been burned by several other shows that didn’t conclude at the end of the 13 weeks. Will you solve the mysteries of Damian’s character?

Howard: We’ve all discussed it. The first conversation we had with Damian and Claire was how long can we keep the ‘is he or isn’t he; of it alive without feeling like we’re jerking off the audience. And I think we have found a really satisfying way to tell that story where this uncertainty is actually compelling.

The answer is that we hope that we answer those questions at the right time.

But Damian Lewis is Homeland’s standout. A British redhead that got a run here in The Forsyte Saga and the short-lived Life, he looks like an all-American boy put through the ringer—a Norman Rockwell teen with too many miles on the tires. When he reunites with his wife (Morena Baccarin) and kids, the scene is near perfect. A smile spreads across Lewis’s face gradually, and then it grows as big as a clown’s—we see his brain reactivating in fits and starts. (His jitters could also indicate someone back in Afghanistan is pulling the strings.)

After eight years in captivity, Brody must relearn his life. How to pose in a family photo. How to chug beer with his Marine buddies. How to…have sex with his wife. During their first time, he’s like a dog just let out of the kennel—it’s a hammering, revolting performance. Brody’s face is aghast. That wasn’t what it was supposed to feel like…