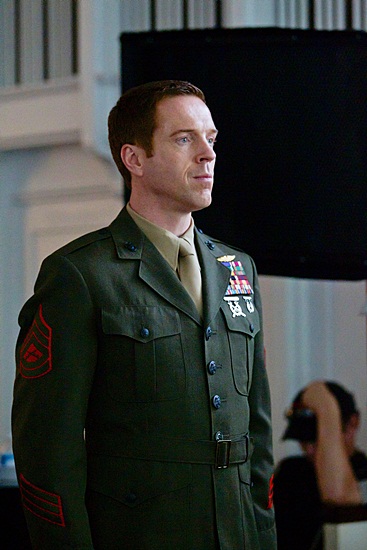 There are so many unanswered questions in this show, and we’re already in the fourth week. Could you talk about some of that ambiguity, and the historical context that sort of causes it?

I think the world 10 years on from 9/11 is a very different place. We committed to a war on terror which from an emotional standpoint I don’t think anybody would have disagreed with after the atrocity of 9/11. But the way in which western governments have gone about it has come under criticism. Certainly people on the more liberal side of politics think we attacked the wrong people. Then the way we conducted ourselves during the war hasn’t been entirely ethical. We have a world in which people don’t know who to trust. They aren’t so clear about boundaries of right and wrong, good and evil.

This show comes out of that. I think that you have two central characters—Carrie Mathison, played by Claire [Danes] who is suffering from an extreme mood disorder who has taken it on herself in a slightly irrational way that she was somehow responsible for not stopping 9/11. She’s brilliant and maverick and volatile, and her sense of danger is acutely honed and turns out to be right.

Her problem is that she only has circumstantial evidence, she only has her instinct and intuition as proof. So she herself she is an ambiguous character. She’s driven, she’s selfish, she’s obsessive…yet we are asked to believe in her as a force for good. She’s the person who can save the United States from another attack from this guy who seems to have undergone some extreme change while he was a prisoner of war in the Middle East.

What was it that drew you to playing this highly-disturbed former POW?

I think why I was drawn to playing him is, what the show doesn’t posit is that the idea of just being a Muslim makes you violent. If that was the show’s central thesis I wouldn’t do it, because I think that’s irresponsible. What happens to Sergeant Nicholas Brody is that he’s broken psychologically and physically, tortured and reaches out for some sort of salvation. The light he finds, the god he finds, is Allah because that’s the one available for him. That in itself is a difficult pill to swallow for a lot of people who quite rightly see there’s no greater symbol of the defenders of our freedom and way of life than a U.S. Marine. They represent everything we hold dear and close to us, and that which we think is important to a free way of life. They defend those principles on our behalf…so to see a young marine soldier embrace a religion whose radical side of the religion are violent extremists is difficult enough but to imagine that this man was radicalized himself and turned in some way for violent means is controversial. And I like controversy in my drama. I like drama that has something to say. I like art that challenges and promotes debate. This show isn’t pious in any way. It’s a thriller and it’s addictive, and that’s because we want to know what happens.

There are so many questions. Is he a terrorist? Is she crazy or paranoid? Will there be an attack? And nothing’s resolved by the fourth episode.

Nothing will be fully resolved until the final episode. You just have to stick with it. I think there’s been in the last 10 years and I’ve read articles on this subject, people have commented on how heroes now in films and TV are flawed, complex, not always immediately likeable. I think they play with that idea. Carrie isn’t immediately likeable. It’s testament to Claire’s acting skills and lack of vanity that she commits to this character entirely in her obsessiveness and driven qualities without worrying if she’s nice or not…similarly Brody is a guy where it’s suggested right at outset of series that this guy might be a threat to homeland security. He might be the guy to commit the next great atrocity in this country. At the same time the show spends a lot of time humanizing him, showing him with his family, showing him loving his children, whilst at the same time not avoiding the complex issue of what it’s like for returning soldiers to reintegrate with their families. It’s not easy.

Read the full interview at WSJ.com.