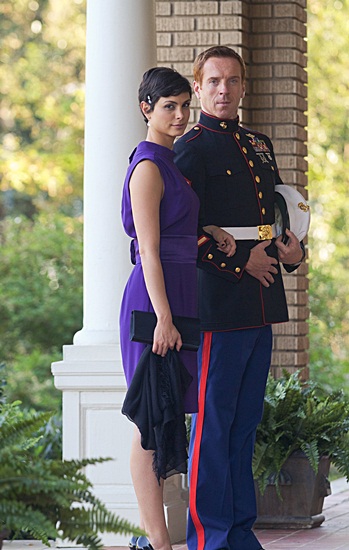 British actor Damian Lewis presents an impeccable American twang as Nicholas Brody in Showtime’s “Homeland,” where he tackles the tough subjects raised by the Iraq War in post-9/11 America.

The 40-year-old actor talked to The Huffington Post about his views on the war, attending Eton College and meeting Steven Spielberg while hungover.

Tell me about “Homeland.”

It’s about a returning Marine sergeant who has been a P.O.W. for eight years. Everyone thought he was dead, but he’s discovered in an Al Qaeda cell. He returns to the U.S. as a hero for everyone except this one maverick, possibly-volatile C.I.A. agent — played by Claire Danes — who thinks he might have been turned and might be here to do damage. He’s someone who has found a comfort and spiritual sustenance in Islam while he was over in the Middle East. He is now a Muslim — and if you think that means he’s a terrorist then ok, he’s a terrorist — but we all know that’s not really true.

Did the show change your opinion of the Iraq war?

My take on it is, I think, reflected in the show, which is why I was interested in doing it. That the world 10 years on from 9/11 is in an even more unsettled place, and although one would agree that action needed to be taken against the terrorists from 9/11, the wars which we chose to wage — and the ways in which we waged them — have not always been done the right way and have been heavily criticized. They have left a lot of people feeling at odds with their own governments and have made people question the rights and wrongs of the actions of their own governments. You start to question your identity. Who do you ally yourself with? The world is a more complicated place; it’s grayer.

Well, it was probably posh at one stage, but not now.

Oh, come on. Prince William and Prince Harry went there!

Well, they were the first royal family to go there, so you might say they weren’t posh — they were arriviste.

You don’t have a posh accent. Where did you grow up?

I’m a Londoner. I was in school in the ’80s. It wasn’t particularly desirable to identify as being from those kinds of schools. Margaret Thatcher was in power. … It was an aspirational society. I was very conscious of that and coming from a school that was so obviously privileged. It felt like a bit of an anomaly. It felt slightly anachronistic.

Your first big American break was being cast in “Band of Brothers.”

I was flown out to L.A. and put up at Shutters [on the Beach hotel] in Santa Monica, and then I went and met Tom Hanks. At night, I went out with a friend, got plastered and got home about 3 a.m. thinking, “This is great, it’s so much fun, it’s ridiculous.” I was then woken up at 8 a.m. by the casting director who told me that Steven Spielberg would like to meet me at 9 a.m..

You must have reeked of booze.

I had so much coffee in me, he must have had one of the sweatiest handshakes ever. I was slightly anxious and sweaty and hungover. Anyway, he was lovely.

It must have been fun coming to L.A.

I always rented a Chrysler Sebring, which is the ultimate tourist rental car. I always used to get them because they were the cheapest convertibles. I’d put the roof down, put some tunes on, shades on and drive down Sunset Boulevard with the palm trees on either side. That was always a kick, such a thrill.

And now you can rent pricier cars.

I know, but I’m still cheap. Things haven’t changed that much.