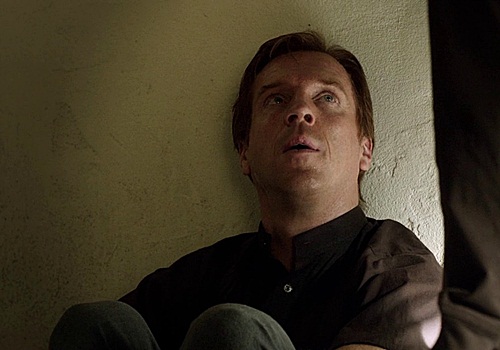 Homeland viewers debated it for weeks, but Damian Lewis always had a pretty clear idea on which side Nicholas Brody would fall.

“I knew that Brody was going to end up possibly doing something violent,” the actor told me over the phone today, careful not to spoil any upcoming developments. “The motivation wasn’t going to be clear until later on, and we’re just exploring it now.”

Yes, we are. And the conclusion to last Sunday’s thrilling episode has fans divided.

To summarize: after five years held captive – “brutally tortured, physically and psychologically,” Lewis emphasized – Brody was set free from his cell, given a shave, a haircut, a hot bath, a comfortable bedroom and an assignment: teach Issa, the young son of Abu Nazir, English.

This surrogate father and child proceeded to bond over their lessons, over soccer and over the fact that each had a damaged relationship with their loved ones: Issa because his dad was a radical Jihadist, Brody because he never believed he’d see his family again.

Then, an American bomb killed Issa while he was at school. The U.S. Vice President denied our role in the incident and Brody – at least from what viewers know at the moment – appears to have voluntarily chosen to seek revenge against his native country.

But is this a believable response, some viewers have wondered. Brody is a military man. Clearly he understands the concept of war and collateral damage, right?

“He’s been isolated from his fellow soldiers for five years,” Lewis said of why Brody has made this decision. “He’s still in this fragile, vulnerable, damaged state when he meets Issa, on whom he projects all his love because he never thinks he’ll see his son again.”

Lewis continued, comparing the explosion that took Issa’s life to The Blitz in World War II, during which Germany bombed England for 76 consecutive nights:

“What he’s witnessed over there is its own kind of terror… a boy in a small village simply goes to school and a silent bomb comes around the corridor and just detonates. And that’s it. You can imagine being changed by that, especially when you’ve been surrounded by those who have been on the receiving end of these drone attacks for so long. You begin to sympathize with them.”

Lewis knows this represents a political debate that could rage for hours, that some may simply state we’re responding to a systematic taking of innocent lives by these terrorists and collateral damage, unfortunately, is the price of war.

That’s fine. You’re free to think that, of course. “But Brody has experienced things almost nobody else has,” the actor says.

As for this Sunday’s episode, previewed above? Can Lewis offer a tease of where Homeland is headed next? Yes: