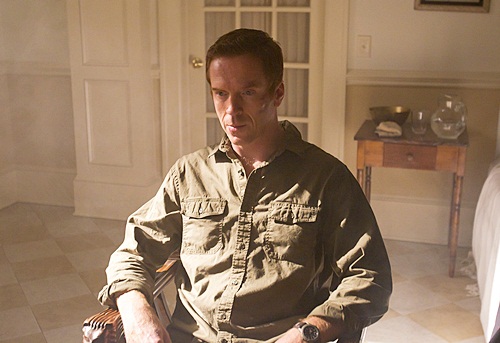 Snakkle: First of all, I would just like to preemptively congratulate you for all of the Emmy nominations Homeland is going to get. When you get them, you can tell me I told you so.

Damian Lewis: Really? I don’t even think about things like that, but that’s so nice, thank you.

Snakkle: It’s been such a phenomenal season—it’s really taken many of us by surprise—and it seems to be a lock. Leading up to the season finale, I know it will only get bigger and better for Sergeant Brody. Have we really seen the truth now, in terms of his motives?

Lewis: We saw a little shift in his motivation, which I think ultimately will be the biggest twist, and quite an interesting one. It seems as though Brody—we’re not saying that Brody is going to commit some kind of terrorist act, although he may not—but it’s clear that if something does happen, it’s going to come from a more sort of personal vigilantism, if you like, because of this love and relationship he starts up with Isa—this sort of surrogate son relationship that he had.

Snakkle: You can tell me the truth: His acceptance of a bid to run for Congress is to pull a punch from the inside, isn’t it?

Lewis: [Laughs.] I think it’s clear that he views the acts of sending drones into houses in war villages or wherever in the Arab world an act of terrorism itself, and Brody will, I think, find a way of inserting himself in a political life. It’s in a balance.… There seems to be a mix of things floating around at the moment. He might commit some violent atrocity; he might also just insinuate himself into the political life. It seems as though Vice President Walden likes him and wants him around. There are parallels to be drawn with Senator John McCain, who had a similar experience in the military and successfully went into political life. There are precedents there that we are going to draw on.

Snakkle: Obviously his bond with Isa runs deep, but now that he is back and making moves for Abu Nazir, will he stop to consider that his actions might make him responsible for an attack that hurts kids—maybe even his kids—the way Isa was hurt?

Lewis: Of course, that’s the moral question. Brody will always be a soldier, and his stance will be as a soldier. So if he wants to act, he will act as a soldier. The problem with Brody is that he is fragile; he is a man who was broken physically and psychologically by his incarceration and being tortured, and his response might be disproportionate. But we don’t know that yet. Certainly there’s that danger. There’s also the possibility that when Brody does act, he does so symbolically so that the act itself is bigger and more violent—more brutal—than you would imagine is necessary.