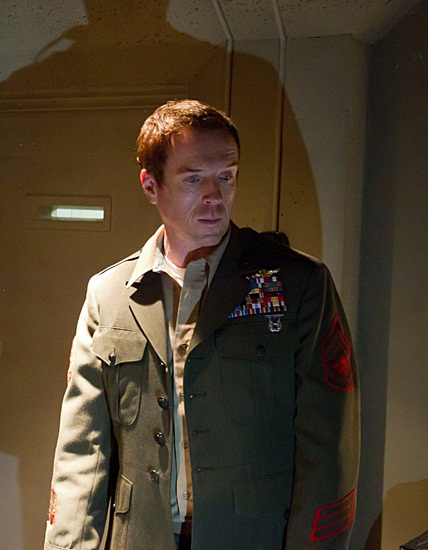 The following interviews have loads of spoilers for the finale!

Did you have this particular ending in mind from the beginning or was it something that organically came about as you were writing?

Alex Gansa: We had plotted out the course of the season in a general way early on after we’d written the pilot, but various elements came into play and we changed things. We knew, for example, that Brody was going to carry out some kind of an attack against the people responsible for Isa’s death. But we didn’t know how he was going to do it. We didn’t know, for example, that he was going to put on a suicide vest. We thought there may be another way to do it. So we had the general ideas, but we didn’t have the specifics nailed down until probably three-quarters of the way through our writing process.

Howard Gordon: We definitely tried a million things on for size, and at the end of the day, what was interesting is the target [i.e., the vice president] wound up being connected to Brody’s backstory, to his captivity. That wound up kind of defining the targets.

I thought that the finale was really good, but my issue is this: The “Homeland” I loved in Season One, it can’t be that show in Season Two because you’ve really taken these characters to some places that kind of can’t be undone.

AG: Yeah, but I think there’s more meat on the bone. You absolutely have to evolve the characters from this place, but we think there’s still a lot of story to be told. But you’re right; it’s not a reset. I mean, the premise of “Is he or isn’t he?” is something that you probably don’t want to go to [in future]. Also, he’s declared to Abu Nazir this idea that he’s going to get close to the next president of the United States. And it’s still an open question about whether he could influence policy or whether he’ll go through with it or [whether] Abu Nazir can put the screws on him in a different way. We still have some real estate to cover.

I think the big questions — Was he turned in captivity? Is Carrie reliable or unreliable? — are questions that we’ve resolved at some level. But interestingly enough, I don’t think the characters themselves have resolved those issues. So we’ve got some more runway to play with, I think.

Also, people have been saying after every episode, , if you read the blogs, they’re saying, “Well, what can they do now? The show can’t go forward from this, can it?” And if you stick around and really delve into the characters and figure out where they would naturally go from here, [the show can move forward].

Speaking of all that, the place that you took Carrie, I thought, was absolutely credible; but it felt so tragic that she doesn’t know that she prevented a terrorist attack on American soil. Given what’s happened, how could she credibly be part of the intelligence community and/or someone who interacts with Brody next season?

HG: Obviously everything is subject to change — but we have what we think is a really good way to get her back in the saddle. And if you look at our models, if you look at Graham Greene and you look at John Le Carre. I mean, for example, George Smiley was …

HG: He’s constantly discredited and excommunicated from the Circus [i.e. the British espionage establishment], and then brought back into the fold, as was Jack Bauer on “24.” You know, there are many ways to get her back into the intelligence community, whether it’s in an official or unofficial capacity.

And don’t forget, we can start next season anywhere we want. We could pick it up right after this season or we could pick it up a year later or two years later. You have a tremendous amount of freedom and liberty in the storytelling on a series like this. So we have a lot of possibilities to explore for next season.

Read the full interview at the HuffPost.

More interviews with the producers: