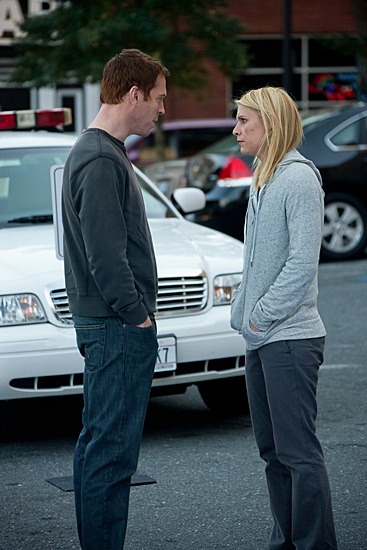 We caught up with Gansa when he was relaxing with a glass of wine, and he dropped five hints about what’s to come for Carrie Mathison (Claire Danes) & Co.—including the real reason they didn’t kill off Nick Brody (Damian Lewis)…

1. Leap Year: Gansa says some time will have elapsed when Homeland returns next fall. “We have the ability now to jump time between seasons—so don’t be surprised if we don’t pick up the very next day.” Who really wants to see a post-ECT Carrie-bot? We prefer Ms. Mathison frenzied and/or drunk.

3. New Faces: “I think we will bring some new characters in, especially to the CIA,” said the E.P. before quickly adding, “But that’s really just in the gestating…we just don’t know what we’re going to do yet.” When asked to name an actor he’d love to see join his dream team, Gansa said: “I’ll tell you this: Robin Williams loves the show. So who knows? Can you imagine Robin Williams and Mandy Patinkin a scene together? That’s what I want to see.”

4. Election Year: “I think an election will be happening” as part of season two’s storyline, Gansa said. “And the great thing is, an election [for U.S. president] will really be happening when we air. So it’s going to be a really wonderful confluence of events.” Brody has a pretty wonderful campaign slogan courtesy of terrorist Abu Nazir: “Why kill a man when you can kill an idea?” It’s a no-brainer for someone running on a domestic terrorism platform.

5. The Carrie and Brody Show: “The center of season two will be the same as the center of season one, and that is the Carrie-Brody relationship,” Gansa emphasized. “The reason why we decided not to kill Brody off in the finale is because that relationship hasn’t run its course yet. That’s what we always come back to—whenever we can intersect those two characters, that’s when we feel most alive as writers, that’s when the series really soars.”

The Wrap – ‘Homeland’ Season 2: ‘Brody and Carrie Have Only Just Begun’
latimes.com – ‘Homeland’ exec says writers can wriggle ‘out of a box’
Collider.com – David Nevins Talks the End of DEXTER, HOMELAND Season 2, NURSE JACKIE, HOUSE OF LIES, and More