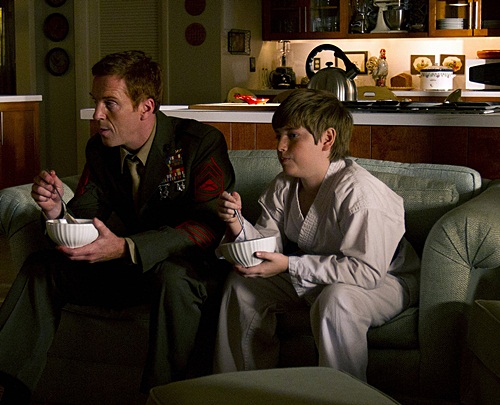 ON AND off screen, Damian Lewis has been in the wars. At home in north London, five-year-old Gulliver is in the middle of a testosterone spike. Little sister Manon, four, is all sweetness and light, but his son is a running, punching, kicking, Power Rangers-mad ball of aggro energy.

“You’re having a perfectly normal conversation,” recounts the actor, “then suddenly he goes hiya – a punch straight in the balls! Just out of nowhere!” The 41-year-old shakes his head and grins. “You’re lying there crumpled on the floor. Unprovoked!”

Maybe little Gully is getting his own back on dad. Or maybe (whisper it), mum – actress Helen McCrory – is transferring some of her home-alone fatigue to their son. After all Lewis has been working away from home rather a lot in the past year. The London-born star of Band Of Brothers is – a decade after that Second World War HBO series made his name – a star in America, and has been putting in the filming hours to warrant it.

Lewis is the lead in Homeland, a new drama series made by US channel Showtime. He plays Sergeant Nick Brodie, an American Marine presumed dead in Iraq. But eight years after being declared missing in action, a Special Forces operation in effect trips over Brodie. The soldier emerges, battered, bearded and tortured, from an insurgents’ hole, and is promptly returned back to the States to a heroes’ welcome.

But is that all there is to it? A rogue CIA agent, Carrie Mathison (Claire Danes) has received a tip-off that an American serviceman has been converted by an al-Qaeda-associated group. Is this Brodie? Has he deliberately been freed so he can return to American soil as, in effect, a walking timebomb? Has patriot turned jihadist?

“Ten years on from 9/11, even though the power of al-Qaeda has been diminished, all these rogue factional elements have sprung up,” says Lewis. “So there are now terrorist networks operating in all these different countries with their own independent cells. And we’re just as likely to receive a terrorist attack from one of them as we are directly from al-Qaeda.”

“And I thought it was fascinating that there are high profile cases of British and American soldiers who have converted to Islam. John Lindh was famously known as the ‘American Taleban’, and is in fact still in prison in the United States. It’s absurd he’s still in custody.”

Digital Spy – ‘Homeland’ premieres to nearly 2m on Channel 4
Telegraph – Homeland, Channel 4, review
The Guardian – A brilliant, complex thriller, Homeland promises to be one of the hits of the year