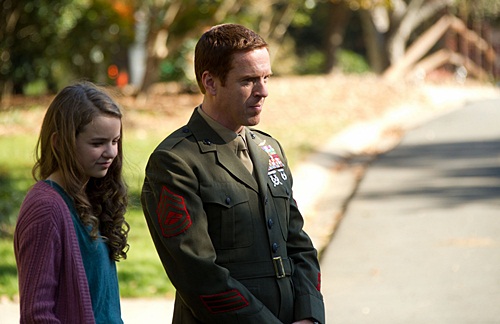 Mildly spoilerish talk for Season 2 up ahead!

On Monday, Showtime’s Homeland was the recipient of a Peabody, the prestigious award that recognizes intelligent broadcasting. We caught up with showrunners Howard Gordon and Alex Ganza at the event, and they proved just how intelligent they are. Crafty, even. We brought up some small season-one details that we had been obsessing about, Carrie-style (minus the wall o’crazy), and they parried them all. An example? VULTURE: As an expert CIA agent, couldn’t Carrie have forged her own prescriptions rather than stealing her dad’s pills? THEM: Oh, we discussed that but decided instead to give her a sister doc, and a dad with the same illness who could just go get a new prescription when she stole his meds and not arouse suspicion. Okay, and … wait a minute, that was never spelled out! “We have answers to a lot of the questions you might have,” said Gansa with a smile after explaining away our concerns, “that just never made it to the script.” Tricky! And just the kind of thing Brody would say in an interrogation.

The duo did drop some hints about the second season, which jumps ahead in time six months when it begins on September 20. “[Carrie] has been through a course of psychotherapy, and ECT, so she’s sought and gotten the professional help that she hasn’t had in years,” Gansa said. “She really is in a centered, healthy place, which we haven’t seen her in before.” Healthy, albeit with some memory loss from the electro-shock, so when will she finally remember that Brody shouted out the name of Abu Nazir’s son in his sleep? “It’s not going to happen in the way that you think,” Gordon laughed. “But it is going to happen.” Plus, Brody’s daughter Dana has some memories of her own to contend with. “She’s processed a lot, and we don’t quite know what she thinks of that last call she made to him,” which prevented him from blowing up the bunker. “So we’ll find out!”

On a less intense note, when we asked Gordon and Gansa what other shows they like, Gansa cited New Girl and mentioned that both shows’ writers work on the same floor: “We’re always running into them in the bathrooms and the corridors.” So who knows what subconscious influence the two shows could have on each other for their second seasons: Carrie might be more adorkable, channeling her manic energy into knitting, while Jess could make a better case for Nick’s flaws if she organized them in colored folders. And if anyone deserves a Douchebag Jar, it’s a terrorist sleeper agent. Trying to blow up the vice-president: so douchey.