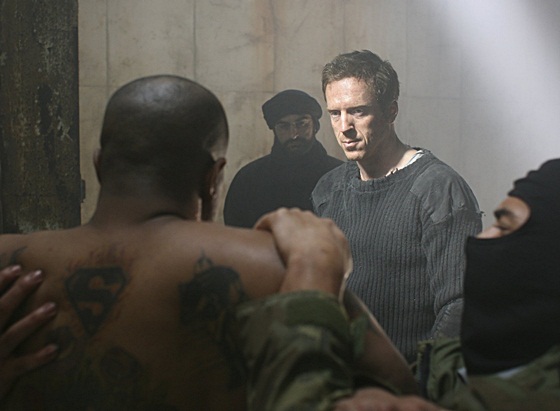 Homeland star Damian Lewis didn’t want his character to send the wrong message. When the British actor was up for the role of secretly traitorous Nicholas Brody, he told producers: “Look, if you’re asking me to play a U.S. Marine who discovers Islam and then wants to go kill a lot of Americans because of Islam, I’m not interested. Because I think it would be irresponsible.” So far, Lewis is happy with the way the character has walked that fine line – not to mention the Emmy he won for the role. But for Brody, things are only getting worse in season two.

Did you have to go on some kind of extreme diet to play Brody at his thinnest?
No, I didn’t, actually. In fact, the times that we’ve seen Brody slim, I wish I had been skinnier. I’m a skinny bastard usually, so I usually have to go to the gym to put muscle on.

Well, you pulled it off.
It’s debatable. That’s the whole thing. When you see Brody at the beginning of the show and you see him naked, you think, ‘Well, maybe he should be a bit skinnier than that.’ And there was a lot of discussion that went on, actually, over how long Brody actually was a prisoner of war, and at what point he was under house arrest and living some sort of normal life within his new community in Syria where they moved him to before he’s moved back to Afghanistan for the overall plot. And the backstory was that he would have been put back in the hole for six to nine months in order to grow the beard long and to get the skin disintegration and stuff like that, so that when they find him it would be authentic. There was always a conversation of ‘Therefore, what would his weight be like?’

Voluntarily going into the hole for that many months was one of his biggest signs of devotion to the cause.
I think there’s a lot that happens between Abu Nazir and Brody. I think Abu Nazir never successfully radicalizes Brody in the conventional sense. I don’t think Brody straps on the suicide vest in the name of Allah, you know, against the Western infidel. I think it really becomes a more personalized act of vigilantism, if you like, as a soldier. And against Walden, the vice president, but certainly Abu Nazir knows how to use that for his gain, to manipulate Brody to use him as a weapon for his own cause.

Read the full interview at the Rolling Stone website.