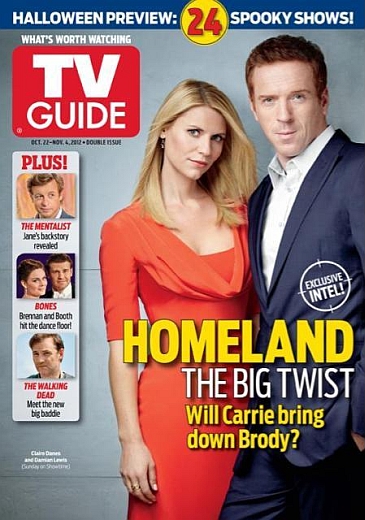 Carrie Mathison is finally in the driver’s seat. In a scene for an upcoming episode of Showtime’s Emmy-winning hit Homeland, the bipolar former C.I.A. agent — played by the mesmerizing Claire Danes — is gripping the wheel with such ferocious intensity, you’d think she’s doing 120 even though the car is parked. In the passenger seat is former POW-turned-terrorist Nicholas Brody (Damian Lewis), who is relaying some literally shocking news. The scene is so riveting, it will make viewers wish for a couple of Carrie’s mood-calming meds.

Politics, suspense and complex storytelling keep Homeland fans on the edge of their seats, but it’s the twisted, charged dynamic between the show’s two leads that has made it one of television’s most addictive dramas. And this week, their interplay gets even more serious. “It really changes the game between them,” says executive producer Howard Gordon. “The rest of the season explores a new relationship.”

Don’t expect hearts and flowers. Her efforts to link Brody to Al Qaeda leader Abu Nazir (Navid Negahban) in Season 1 not only cost Carrie her job, but also her sanity. “It’s very profound that she was in fact right all along about Brody,” says Danes, taking a break on location in North Carolina. “She can trust herself again. But then she comes in contact with him. So it’s managing her passion for her work and for this man, even though her feelings have been compromised by the ways in which he mistreated her.”

Carrie’s C.I.A. mentor and fierce protector, Saul Berenson (Mandy Patinkin), “is very anxious about her sharing proximity with Brody, because he knows how vulnerable she is around him,” Danes reveals. “They’re a bit at odds for that reason.”

If Carrie’s life is infused with new purpose, Brody’s is a deepening well of lies and duplicity. He professes loyalty to his wife, Jessica (Morena Baccarin), and children, yet betrays them politically and personally. He claims to want to correct U.S. behavior toward Islamic countries by moral persuasion, then warns Nazir of a C.I.A. ambush. “Brody really does want to pursue nonviolent means to achieve his political ends,” says Lewis, who is as relaxed off camera as he is tightly wound on. “He believes he can be a good congressman and try to stop the killing of civilians overseas, but we will see that Brody is simply not in charge of his own destiny. He’s the puppet of too many people.”