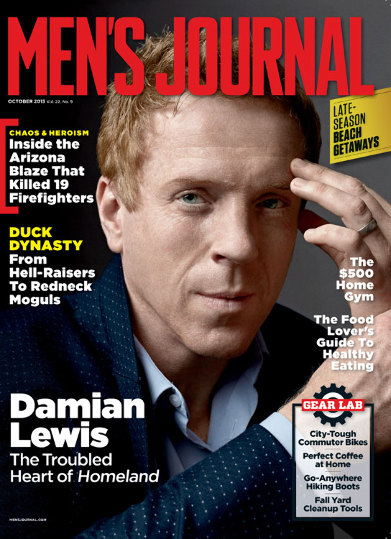 There are 316 million people in the United States of America. About six million of them watch ‘Homeland,’ Showtime’s thriller about world terror, paranoia, and bipolar disorder. That’s about 2 percent of the population; roughly what the guy with the beard running on the Libertarian Party ticket gets when he runs for Congress.

But it’s the right 2 percent. It includes CIA analysts, spooks, and at least two United States presidents – something ‘Eastbound & Down’ can’t claim.

“Mr. President,” he said, “the writers had asked me to say, if we’re going to go into Iran, would you give us a heads-up, because we’d like to keep the show as current as possible.”

He did as he was told.

Lewis thought that was it, so he was a bit surprised when he was ushered to his seat for dinner and the guy across from him was the president. They made small talk about what a fanboy Obama was before Lewis asked him a question that had been nagging him all evening: How the hell did he find time to watch Homeland?

“Well, Damian, on Saturday afternoons, Michelle takes the girls to play tennis, and I say I’m going to the Oval Office to work, and instead I watch ‘Homeland.'”

Everyone had a good laugh. After the dinner, Lewis cheekily signed a DVD for the president: “Mr. President: From one Muslim to another.”

“I panicked after I wrote that,” says Lewis. He arches his auburn eyebrows for comic impact. “So, a week later I wrote [White House press secretary] Jay Carney, whom I’d become friendly with.” (I told you the show was connected.) “I said, ‘Hi, Jay; I hope the president liked my present and has a sense of humor.’ Jay wrote back and said it was totally cool and he loved it.”

International incident avoided! (Lewis’ encounter with Bill Clinton was less risky, if longer-winded. The former president gave Lewis the two-handed handshake and went into a Clintonian monologue about the importance of the liberal view on the consequences of terrorism being represented in popular culture. Lewis nodded a lot.)

Read the full article at MensJournal.com