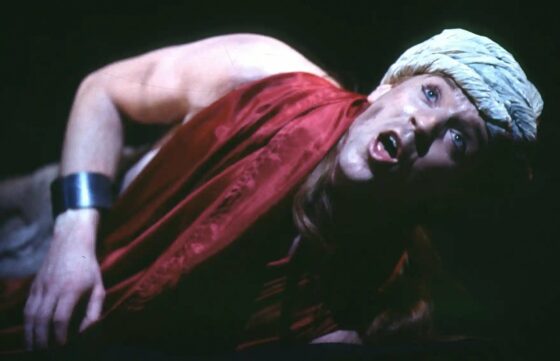 Cymbeline, King of Britain when Augustus Caesar was Emperor of Rome, has a daughter, Innogen, and two sons who were stolen in infancy. The queen, his second wife, has a son, Cloten, whom Cymbeline wishes Innogen to marry, but she has secretly married the commoner Posthumus Leonatus who was adopted as an orphan and raised in the Cymbeline family. Cymbeline banishes Posthumus to Rome, where he meets Iachimo, who wagers with him that he can seduce Innogen. Arriving in Britain, Iachimo realizes that she is incorruptible, but, hiding in her bedroom, obtains evidence which convinces Posthumus that he has won the wager. Posthumus orders his servant Pisanio to kill Innogen at Milford Haven, but instead Pisanio advises her to disguise herself as Fidele, a page. In Wales,she meets her brothers, who were stolen twenty years before by the banished nobleman Belarius. Cloten pursues Innogen to Wales in Posthumus’ clothes, determined to rape her and kill Posthumus. Instead, he is killed by one of her brothers, and his decapitated body laid beside Innogen, who has taken a potion that makes her appear dead. When she revives, Innogen/Fidele joins the Roman army, which is invading Britain as a result of Cymbeline’s failure to pay tribute to Rome. Posthumus and the stolen Princes are instrumental in defeating the Roman army. A final scene of explanations leads to private and public reconciliation.