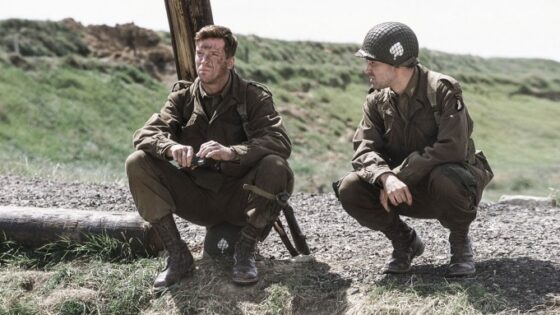 On June 6, 2001, HBO staged a premiere at Utah Beach in Normandy, France, flying media, cast and crew and about 50 Easy Company veterans and their families to the spot where the vets had parachuted in on D-Day. “It’s surreal. It is powerful emotions,” Hanks told THR at the premiere. “You can ask these guys, ‘What were you doing right about now 57 years ago?’ They were probably storming enemy guns. Death and destruction and stench was all around them, and it had only just started for them. It’s hard to fathom.”

Fifteen months later, Band of Brothers took home the top prize for a limited series at the 2002 Primetime Emmys. “We didn’t just win this,” Spielberg said upon accepting the award. “The men of Easy Company won this in 1944.” The audience rose to their feet and applauded the veterans, who were shown watching a live feed of the telecast from a nearby hotel — some of whom joined in the post-Emmys celebration as guests of honor at Spago later that night.

Read more of the original article at Hollywood Reporter