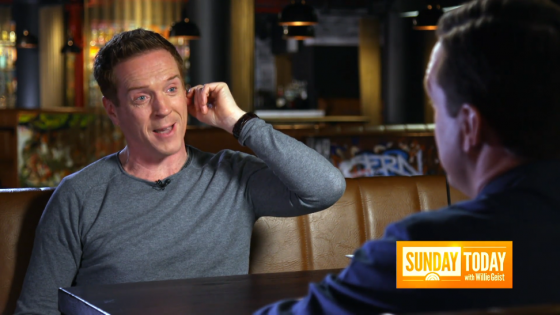 On Sunday, April 22, 2018, Damian appeared on NBC’s Sunday TODAY with Willie Geist at New York City’s Spin to discuss insider tips about what’s to come on the upcoming season of Billions, Damian’s breakout role in Band of Brothers, his American and British accents, and he even showed off his crazy ping-pong skills in this video. For additional interview video snippets and extras, view our original announcement.

Watch the interview video and listen to the full-length podcast below, and don’t forget to visit our Gallery for the latest photos.

Damian says of Billions and playing Bobby Axelrod, “This season we descend even further through the circles of hell. And as each personable, individual soul blackens and darkens because of the corrupting influence of power and money, we see the stakes just rise higher and higher. It’s really good fun. You know, this is a show about assholes being assholes. That’s why he’s [Axe] fun to play. He’s a predator, he prowls, he’s looking for prey – that’s a good metaphor for hedge fund guys who are looking for the injured wildebeest off the back of the pack that’s under performing. He’s got a swagger about him. He’s an alley cat. He’s a scrapper, he’s that boxer who lives on his wits and who’s wits are just a little bit quicker than everybody else’s so he can roll and he’s got quick feet.”

Over the last two years, Willie has sat down with some of the biggest names in news and pop culture — from actors and musicians to presidents and CEOs — to talk about the stories behind their success. Starting now, these entire conversations will be available every week on the “Sunday Sitdown” podcast.

On Wednesday, March 14, 2018, Damian appeared on NBC’s morning talk show The Today Show at Rockefeller Center in New York City and spoke with Savannah Guthrie about Billions season three and Bobby Axelrod’s anger issues. View video below and see photos in our Gallery. Be sure to catch the season premiere on Showtime on Sunday, March 25, 10:00 pm EST.

One in a Billion on The Today Show