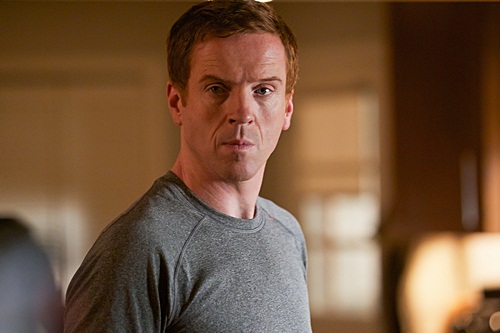 Off camera, he’s a Londoner of Welsh extraction, an Eton grad and Royal Shakespeare Company trouper.

There are times when even he gets confused.

“On the weekends, I’ll wake up, go to the store, do some errands and realize, ‘I’ve been talking like an American all day,’ ” Damian Lewis, 40, says by phone from L.A., where he’s shooting the eighth episode of Homeland.

Curiously, it’s the weather that causes him to toggle between his true self and his adopted persona.

He hadn’t realized that he was playing a serviceman on cable for a second time until it was pointed out to him.

“That’s superficial to me,” he says. “They’re such radically different people in radically different circumstances. In terms of military bearing, yes, I find similarities. For a dithering actor like myself being able to play military men who are trained to make decisions quickly and act on them decisively is very therapeutic.”

To play a tortured POW like Homeland’s Brody takes some commitment.

“I lost a lot of weight for this,” Lewis says. “I wanted to be skinny. I’m not the most buff dude on the block, but I thought for truthfulness, this man has been in a hole for eight years. It would be ridiculous for him to take off a shirt and see a gym body.”

He also did extensive research on post-traumatic stress disorder.

“So many guys come back with an inability to have a tender, loving relationship with their wives. And sometimes an inability to love their kids,” he says. “They look forward to seeing them and then they’re shocked and confused by their own lack of interest.

“And that’s just from a 12-month tour of duty, from being engaged in live fire in that rough, all-male setting. Imagine being a POW for eight years and being brutalized that whole time.

“Brody is treated as a war hero but he’s carrying a massive secret,” continues Lewis. “Carrie Mathison [Claire Danes] is convinced he’s not everything he appears to be.”

Read the full interview at Philly.com