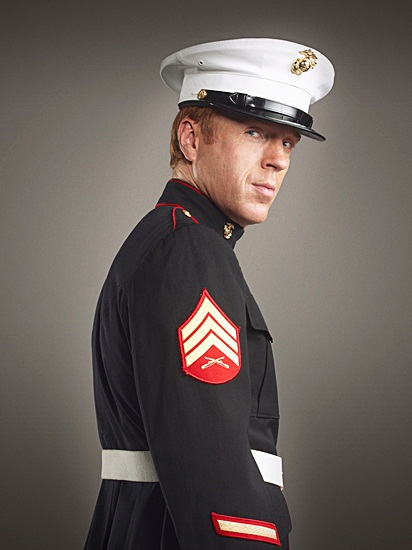 ABCNews.com: How did you prepare to play Sgt. Brody?

Lewis: Brody was a very tough character for the guys to write, I think. The idea that this man had been

captured in the early days of the Iraq war, Operation Iraqi Freedom, and was held prisoner and then released eight years later,

I think what they knew was that he would be suffering from post traumatic stress disorder of some kind. And in his search for

salvation and some peace and spiritual clam, he had found God but the God he had found was in the form of Allah.

So I did a lot of research, as much as I could, into Islam and I went to the London Central Mosque and spoke with people

there who were incredibly welcoming. I learned how to say the prayers.

Alongside that, I was researching post traumatic stress disorder, reading accounts of how people dealt with it day to day.

Learning, psychologically, what it means to live with that daily.

And then thirdly, I have played soldiers before, I suppose most obviously in “Band of Brothers,” but the Marines have their

own different sets of traditions. I spent time hanging out with one or two guys really for anecdotal evidence and spoke with

friends of mine who’ve been at war. I gathered all the information I could and let it assimilate in me, somehow.

ABCNews.com: You got the attention of “Homeland’s” producers by playing a schizophrenic in “Keane,” and now

you’re playing another emotionally damaged character. What draws you to roles like this?

Lewis: Most actors will say that the more psychotically complex a character, the more rewarding they are to

play. I enjoy the responsibility of playing people with real life psychological complexity. But I don’t know, probably it’s

having been sent to boarding school all my life. Emotional control is learned at a very young age in order to cope. It’s

reminiscent of being a young soldier in an army. You repress your natural responses. And in that way, boarding school is a great

place to train as an actor.

ABCNews.com: What do you think Brody is at this point? Has he been turned or hasn’t he?

Lewis: There really isn’t a simple answer to that. What I would say as a little finale teaser for your

readers is that Brody attempts an act that is pretty shocking, but the reasons that he does it, or the reasons he lays plans to

do it, are more personal and emotional than viewers might be expecting. It’s incredibly shocking and visual.

or Afghanistan or wherever he’s held — was he a prisoner of war for eight years or was it more like two or three years? Those

things are still unclear for the audience.

just been hanging on. He’s confused by who he is. But I think that he decides that as a solider, he needs to act. It’ll be left

up to everyone else to decide whether his actions are acceptable or not.