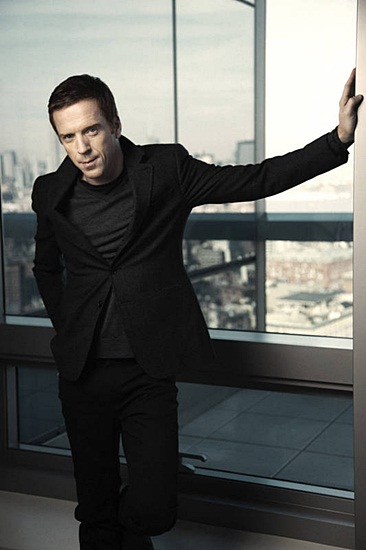 “Straight to the sore point,” sighs Damian Lewis, slouching deeper into an armchair in the library room of London’s Covent Garden Hotel. GQ has made the mistake of bringing up the Golden Globes: while Lewis’ stunning new psychological drama Homeland won Best Show at the awards ceremony last month, Lewis lost out to former Frasier star Kelsey Grammar for Best Actor. “I went up to Kelsey to say congratulations afterwards,” says Lewis. “He replied ‘Who are you?’ He didn’t really – but he said it with his eyes.” Although a Londoner, Lewis is a Hollywood veteran, impressing in the likes of Band of Brothers and shortlived NBC drama Life, plus a recent stint opposite Keira Knightley in the West End in The Misanthrope. Homeland is his biggest gig yet: a smart, adult thriller with a knack for explosive twists, led by Lewis’s prisoner of war and Claire Danes as Carrie, a paranoid CIA field agent convinced that he has been turned to Al Qaeda. Ahead of the series’ debut on Channel 4 later this month, we chat to Lewis about the difficulty of sex scenes, TVR problems and Billy Idol karaoke…

GQ.com: After your marine training for Band Of Brothers did you go back for a refresher course for Homeland?
Damian Lewis: No, I didn’t – even though I’m playing a US soldier this is very different. I researched a little bit into what it’s like to be a sniper, because Brody is part of the sniper platoon. I also read Brian Keenan’s An Evil Cradling, which is a brilliant account of his three and a half years in prison in Beirut.

Given the number of twists, how much did they tell you ahead of time?
I had long phone calls with the creators. Starting out I was keen for Brody not to be a brainwashed soldier à la The Manchurian Candidate but that he had made a strong choice himself to convert to Islam. Then it would be up to [series producers] Alex Gansa and Howard Gordon as to how much they preyed on audience fears that when someone converts that therefore make them a terrorist. It is far more interesting if a Marine choses Islam as a force of good that helped him and for him to be able to find the beauty in a religion that a lot of people are suspicious of. The writers agreed with that but they also said “He has to be the threat.” In the end the reasons for why he acts are different than you might expect.

You and some of cast lived together during filming. What’s a Homeland party like?
Ginger and lemon tea, a nice vegetarian dish… maybe if we’re feeling raucous an After Eight, and then home to bed. We’re very committed. [laughs] A lot of us lived in the same apartment block, so we were quite good at giving dinner parties. My proudest moment was cooking eggs and bacon for brunch before going off to watch the Carolina Panthers play – we lined our stomachs for drinking a lot of cheap beer.

What’s the best thing you can cook?
I’ve gone back to my favourite book which I used when I was a bachelor, which is Gary Rhodes’ Great Fast Food. It’s absolutely brilliant. It does take forever if you have to buy all the ingredients just for that recipe though – you go around the aisles and it takes about three hours.

What restaurant do you always go back to?
I do love J. Sheekey. Pop in quickly late night for the fish pie and buttered green beans. The Arboath Smokies they do are great and they do a fantastic kedgeree, with a lovely poached egg just sitting on top. Potted shrimps are also a favourite.

GQ cover star Keira Knightley recently said she has vodka before sex scenes and champagne after. What’s your secret?
That’s like a medicine and a celebration, isn’t it? I don’t have champagne after sex scenes. I’m full of self doubt and self analysis – just like in real life! In my view there’s usually a much sexier way of bringing two people together than seeing explicit sex. In Homeland they’re not healthy, functioning experiences. They’re an indication of the psychological breakdown and the damage that now exists in a marriage, particularly for this soldier returning from war. Sometimes on [American cable channel] Showtime there’s an obligation to do sex scenes, just because they can.

Read the full interview at the GQ.com (UK) website.