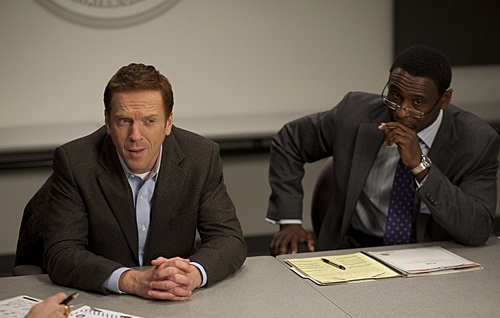 scintillating psychological thriller, following a US PoW who is rescued after eight years in captivity and the CIA

Digital Spy caught up with Damian Lewis, who stars as tortured marine Nicholas Brody, and David Harewood, who

plays CIA deputy director David Estes, for an insightful and revealing chat about what to expect from the Golden

When you were first cast in Homeland, did you ever expect that the show would be such a massive success?

Damian: “You never know when you’re taking a job, ever… but you try to take good scripts. That’s

all you can do as an actor – take the best thing available. Even then, it’s not [really] in your control. Certainly

not in film and TV, because there are so many other elements. You just have to take control of your own performance.

But it was a good pilot.

“I’d lived in LA for two years and I said to my agent that I wouldn’t do any more network TV, because my family

and I had just made the decision to live in England. It would be a whole year in LA shooting network TV.

“But I said that if something really interesting in cable TV comes along and I’m lucky enough to be on a list,

then send it to me. And lo and behold, this showed up.

“I jumped [at it] so it was definitely a cut above, when I read it. But still then, you don’t know [if it will be

David: “It’s extraordinary really, but I didn’t actually read [the pilot] until after I got the

job! It came through from my manager and I read the e-mail very quickly – I was doing a play at the time, at the

National. It was 14 pages – 5 scenes. So I learnt the scenes, put them on tape and sent them off. They obviously saw

“When I finally got the job, I thought I’d better sit down and read [the pilot]. As soon as I read it, I thought

it was fantastic. When you’re trying out for pilots, you read a lot of scripts, but this really stood out.

“It was different – it wasn’t cops or lawyers. There was something very different about it and I was very happy to

be attached to it.”

Is it refreshing to be part of a show that has so many moral shades of grey?
Damian: “Yeah, it’s what I was drawn to. In fact, I had a long conversation [with the writers] about

“I said that it is far more interesting and far more subversive if that great symbol – a US marine, who goes

abroad to fight for our beliefs and our freedoms – finds it necessary to worship a different God, or God in a

“I thought that was subversive, challenging and thought-provoking. I didn’t want him just to be a Manchurian

Candidate – someone who was brainwashed. I thought that was letting him off lightly and letting the show off lightly.

It’s a far more dangerous and interesting choice to explore why he chose this.

We didn’t live in a state of anxiety and fear about Osama Bin Laden. The CIA might have, and they failed to prevent

it. But the general public didn’t have any knowledge.

“Now we have knowledge of it, and it’s a very clear and present danger in our lives. It’s fostered an anxiety, a

paranoia, which is why this show is, I think, working so well now. Add to that the fact that the way in which our own

government perpetrated the war on terror hasn’t been universally agreed with. So it’s a greyer world, still, that