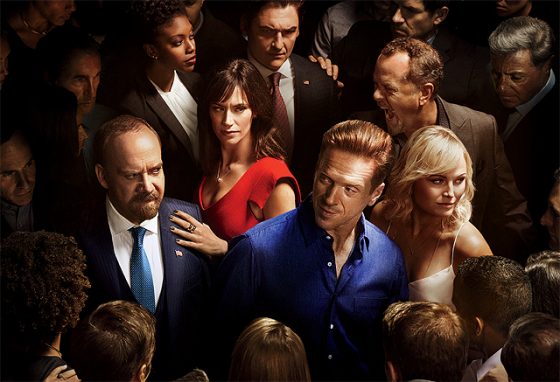 You may have heard that there’s a new adminstration coming to Washington, D.C., pretty soon — a regime that, in many people’s eyes, is much more friendly to billionaires and business and their not-always warm and fuzzy ways. And although Billions, Showtime’s gritty drama about U.S. Attorney Chuck Rhoades (Paul Giamatti) and his battle with hedge fund king Bobby Axelrod (Damian Lewis), is about big ballers dodging government officials, don’t look for it to be a statement on the new world order when it returns for Season 2 in February.

“Although it’s not specifically about the incoming administration, the world was shifting when writing and we were aware of that,” executive producer Brian Koppelman said at the Television Critics Association winter previews Monday.

Season 2 will have stories that reflect the world of hedge fund managers and their increased pressure, said Lewis, whose self-made billionaire Axelrod is frequently unscrupulous. We’ll see his increased challenges and their effects playing out, but as David Costabile told TVGuide.com in an earlier interview, producers and writers have created a world that exists in its own orbit, so they’re not exactly ripping stories out of the headlines.