“Clipping the young falcon’s wings before they get a chance to soar?” 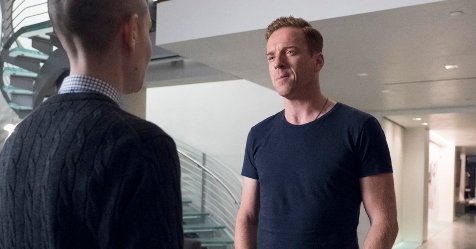 In the Season 3 premiere of Billions, hedge fund honcho Bobby Axelrod (Damian Lewis) gave up his trading license while the U.S. Attorney’s office investigates him for white-collar crime — the finance equivalent of a cop putting their badge and gun on the sergeant’s desk — and deputized brilliant-but-inexperienced Taylor (Asia Kate Dillon) to oversee the firm’s investments in his stead.

But Axe has a Michael Jordan-like pathological drive to win, and he won’t be able to stay on the sidelines for long.

“There will be some tension that will emerge as Axe seeks to reinstate himself,” Damian Lewis warns TV Guide.

Axe’s meddling could turn into the boss clipping his young falcon of a CIO’s wings before they get a chance to soar. Taylor looks up to Axe, and if he destroys their confidence, it’s going to be hard for even Wendy (Maggie Siff) to build Taylor back up again.