Contradiction and Consternation for Axe 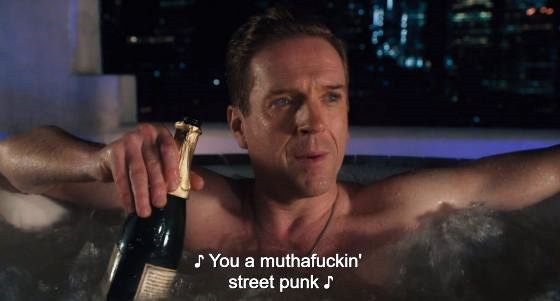 In the current “Golden Age of Television,” it is undisputed that television programs have begun to venture into the cinematic. With longer run times, higher budgets and a broader horizon of freedom to express a theme or message, it is plain to see that television is no longer film’s “little brother” in the “family” of the overall media landscape.

One of the most prominent ways in which television has elevated its craft is through the augmented role of music. For the past century, music has been an integral part of film culture. There is no “Rocky” without “Eye of The Tiger,” there is no “Gentlemen Prefer Blondes” without “Diamonds Are A Girl’s Best Friend.” Imagine a movie without a score or musical montage. It would just feel like a hollow stage play. Conversely, music has no storied history in television (save for catchy theme songs). In fact, the only example of overlaid audio I can think of in past television is the episode of “Seinfeld” when George attempts to use Petula Clark’s “Downtown” as a clue for his work project. And even still, that was 1996.

As television increasingly moves towards cinematic production quality, it only seems right that similar musical integration techniques are adopted. Just as with the movies, now, television programs that lack music just seem of a lower stratum than those that do. However, it is not enough to slap a Top 40 hit into the credits sequence, and call it a day — it must be done skillfully, purposefully. When done right, music has the power to add dimension, to convey something that could not be expressed clearly through dialogue or camera movement. In addition to adding rhythm, a kinetic energy to a moment or sequence, music is even integral in constructing the tone of the project. Music has the ability to evoke something in viewers that would not be able to be felt without it. So, without further ado, here are the top ten television musical moments of 2018.

While watching two white men steeped in the world of white-collar crime walk off an elevator, Vince Staples may not be the first artist to come to mind. Yet, in “Billions” episode “Wags and Axe,” no other song could be so fitting. As hedge fund boss, Axelrod (Damian Lewis, “Band of Brothers”), and his (quite literal) partner in crime, Wagner (David Constabile, “Suits”), enter a celebration of their latest escape from the law, Staples’s “Street Punks” comes thumping into the scene. As the song grows, so does the anxiety in Axelrod’s expression — the once triumphant tune transforms into something almost threatening, encircling. “You a muthafuckin’ street punk / This’ll blow you up.” The song taunts Axelrod, drowning him in a beat that punctuated a near-perfect display of contradiction and consternation.

Read the rest of the original article at Michigan Daily