From Axe Cap to Ice Juice: The Showtime Billions Dictionary 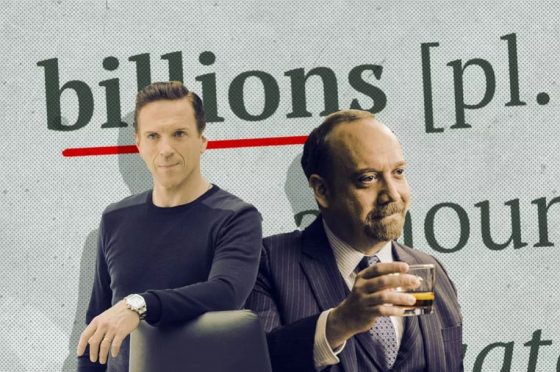 Before the new season begins, it might be helpful to get familiar with the language and learn, for example, what a Dollar Bill really is.

For anyone who hasn’t been already initiated into the Cult of Billions—also known in some circles as House of Wags—the idea of starting Showtime’s financial drama series might be a little intimidating. The show does, after all, focus on a hedge fund manager, a U.S. attorney, and a great deal of financial jargon that might come across like a foreign language. But all the finance speak serves as a helpful, necessary tone-setter for a perpetually entertaining dick-swinging contest between two hot-headed dudes that takes a ton of casualties.

For those looking for a Billions refresher before the fourth season premieres March 17, or for anyone seeking a helpful reference guide as they dive headfirst into a binge, I present the Billions Dictionary: a glossary of financial terminology, company names, abbreviations, and other essential tidbits to get the most out of your viewing experience. Sit back, treat yourself to a serving of ortolan, short some Ice Juice, and enjoy.

ATM (n.) — This is silly, I already know what this means! you might be thinking, laughing your way to the bank to make a deposit. Not quite. While ATM indeed stands for automated teller machine in the real world, that is not how the abbreviation is used in the Billionsverse. According to the wise sage of body sushi, Mike “Wags” Wagner, ATM stands for “ass to mouth.” I’ll let him take it from here.

I will not include a GIF of this act; this guide is intended to be safe to view in workspaces and primarily libraries. Instead, I will include another BDSM-related GIF of Paul Giamatti getting spanked by Maggie Siff. Is it slightly inappropriate, and something that’d be awkward to explain to somebody who walks by your laptop or smartphone? Sure, but at least it doesn’t involve urine.

Champlain, The (n.) — The name of the luxurious boat owned by Lawrence Boyd—former CEO of Spartan Ives. It is unclear what the Champlain looks like, but given that Boyd used to run the fictional version of Goldman Sachs, I suspect it’s on par with Dan Snyder’s IMAX theater superyacht.

cooking the books (exp.) — Changing the numbers of a company’s financial records in order to make a company look more profitable to investors, steal money from the company, or avoid a higher tax rate. In Season 1, Axe gets some dirt that telecommunications company Mundia-Tel’s stock is about to crater from six of its top executives cooking the books. Axe Cap sells its position in Mundia-Tel, and Axe pretends that he’s going through a midlife crisis so that other investors don’t follow suit. When the telecom market goes down, everyone but Axe Cap sinks along with it.

Dollar Bill (n.) — Not a form of currency, but the nickname of Axe Cap employee and frequent vest wearer Bill “Dollar Bill” Stearn. Dollar Bill literally keeps a lucky dollar bill on his desk; he’s fiercely loyal to Axe; and he’s notoriously cheap, despite being a multimillionaire. The cheapness might be an integral facet of his personality; it also might have something to do with the man having two families to support financially.