Jeffrey DeMunn: Wry and Witty and Bright an Actor He Can Be 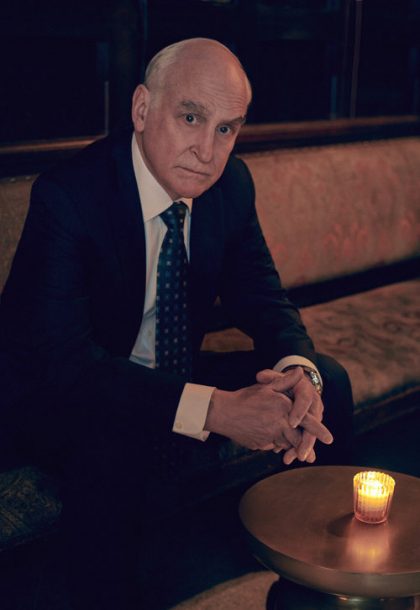 Jeff DeMunn was a couple of years behind me at Nichols School. I never knew him, nor knew nothing about him except that we shared a first name (which, believe it or not, wasn’t as common back then as it is now).

DeMunn has publicly noted that nothing about his life at Nichols gave evidence of the actor he would become after studying at the Old Vic. (He has, in one charming interview, admitted that in one Nichols theatrical performance, he forgot to say his line.)

The old term character actor isn’t used anymore. “Working actor” is both the modern term and the accurate one. But if you, like me, treasured character actors all your life, you’ve seen DeMunn in movies and TV constantly for decades – always impressive for his immense amount of self-discipline.

Which is to say that DeMunn is not an actor known for needlessly calling attention to himself. There was, for instance, one actor in the cast of “The West Wing” who was, I understand, renowned for grabbing props at the last second before shooting a scene, just to get a little more attention to himself in a scene (by, say, tapping a file folder in his hand.)

I’m mentioning this because I have been paying very close attention to DeMunn throughout the run of Showtime’s “Billions” which begins its fourth season this Sunday. And I can tell you self-effacing DeMunn finally has a juicy little scene in the opener which gives you a sense of just how wry and witty and bright an actor he can be.

He’s been an acclaimed actor on stage for decades now since blowing critics and audiences away with “K2” on Broadway. But on TV and in films, he has seemed to take, whenever possible, supporting roles where self-discipline is paramount. I can’t tell you how nice it is to see him register fully on the fly in an episode of “Billions.”

Which, with the wildly erratic “True Detective” and the ultra-gloomy “Ray Donovan” have been my favorite distressed-testosterone-fests on cable TV in the great tradition of “The Sopranos.”

What you have to understand about DeMunn (and which I never knew when we were teenagers) is that he comes from a theatrical family. His father was Jim DeMunn and his stepmother was Betty Lutes DeMunn, two cardinal figures for many years in local Buffalo theater.

“Billions” continues to be brilliant. I’ve seen four episodes of the new season and it remains all of that.

That’s because “Billions” only pretends to be about money and the super-rich grandees of Wall Street. Their shenanigans in the mega-money world of hedge funds are the settings, not the subject.

Let’s all admit that most of us know about as much about that as we do the history of surgical instruments in Saudi Arabia. There is a good reason why most Americans require tax preparations by experts at this time of year. Money is a very special subject–one of the most special of all–which is why a dramatic TV fantasy about money manipulation at its most esoteric could have been a tedious minority subject indeed.

But “Billions” hasn’t been about money. It’s about sex and ego and power and dominance and submission and the language of those who are always hopelessly compelled to prove themselves. Half the traders and Wall Street grandees and government connivers in “Billions” sound as if they learned how to speak the language of castration at the David Mamet Academy of Linguistics. It’s a TV show about the joy of articulate psychopathology.

It is, in so many ways, the wildest and woolliest show on TV.

We’re not just talking about the fact that we’ve watched, for three seasons, an ego death match between an up-from-nothing Wall Street super-trader named Bobby Axelrod (Damian Lewis) and a politically connected and ambitious U.S. Attorney named Chuck Rhodes (Paul Giamatti.) We’re talking about the fact that Axelrod’s most important employee is Rhodes’ wife, the psychiatrist who counsels everyone at Axe Capital in the fine art of trouncing the egos of everyone else alive.

Bobby’s most brilliant new trader was Taylor Mason, who is played by Asia Kate Dillon who is listed in the IMDB website as “the first gender non-binary character on television.” Dillon–and her character’s–preferred pronoun is “they.” Which makes any reference to possessive “their’ not “her.”

The amount of such esoteric stuff imparted on the fly in every episode of “Billions” makes the show so much more than TV’s most sophisticated and brainy variation on “Dynasty.”

This is a world where the male principals eat foods so rare and illegal that they’re required to wear hoods over their faces while they chew, lest their criminal and anti-social self-indulgence be openly visible to other members of the human species.

Who can resist such stuff? I certainly can’t.

As we begin “Billions” again this weekend, experienced watchers will know that all three principal actors–Lewis, Giammatti and Siff–have somehow laid down arms and formed Common Cause.

On the other side of their sadomasochistic giant money games are the hermaphroditic Taylor and “their” economic backer, played with joyous hammery by John Malkovich, as a Russian oligarch with scene-stealing teeth.

I had a great time watching all four new episode, even when some plot stuff got so arcane that it lost me completely.

Read the rest of the original article at Buffalo News