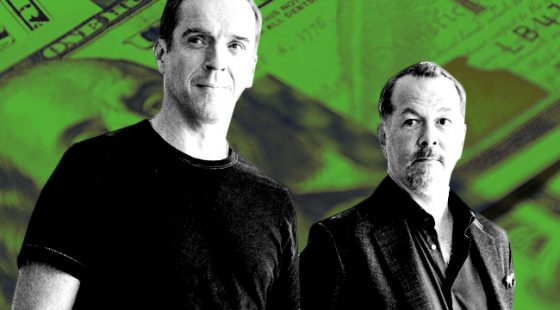 The Rundown is a weekly column that highlights some of the biggest, weirdest, and most notable events of the week in entertainment. The number of items will vary, as will the subject matter. It will not always make a ton of sense. Some items might not even be about entertainment, to be honest, or from this week. The important thing is that it’s Friday and we are here to have some fun.

ITEM NUMBER ONE — The boys are back in town

Oh heck yeah, it is Billions time again, baby. The Showtime series about despicable hedge fund boys and the morally bankrupt government officials who are chasing them is back for a fourth season this weekend. I’m so amped up about it. I love this show so much. It’s a little messy and very fast and I hate every character on the show and you can put it all straight into my veins. You know how you feel about Game of Thrones? That’s how I feel about Billions. Billions of Thrones. I don’t know how I should feel about that but I stand by it.

I’m not joking about hating every character on the show. Bobby Axelrod (Damian Lewis) is a sociopath who will trample anyone or anything if it means making a single extra dollar. Chuck Rhoades (Paul Giamatti) is a goon who will do the same for a conviction. They’re flip sides of the same coin, really, one a broken wealthy man who came from nothing and fills the hole in his soul with money, the other a broken public servant who came from wealth and fills the hole in his soul with influence. I’d happily spit on both of them if I saw them on the street.

I also love them. Look at the way Axe drinks water.

God, they’re so intense and terrible. I must know all of their stories.

It’s not just them, either. Everyone else on the show is a borderline irredeemable jerk, too. Wendy is occasionally the show’s moral center but also seduced Mafee and framed an oncologist to avoid jail time for something she very much did. Wags is a charming heathen and David Costabile is a damn prince but that character would run you off the road if he was late for a Knicks game. Taylor is at least semi-conflicted but is still kind of a jerk. Dollar Bill is a huge jerk. Sacker is a jerk. Connerty is a putz and a try hard but also a jerk. Even Mafee, my sweet gangly boy, is a proud lacrosse doofus who failed his way into a seven-figure finance job, which makes him a jerk by definition. I’m sorry. These are the rules.

In fact, you could make an argument that the only non-jerk on the show is the Russian oligarch played by John Malkovich (John Malkovich is on Billions!), because at least he wears his evil nature with pride. 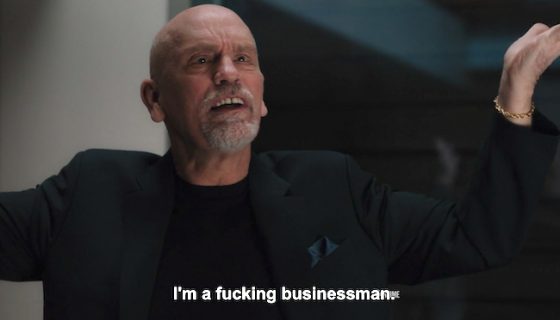 I’m very sure this character has a name. I am also very sure I will never remember it because Malkovich is just doing the Teddy KGB accent fromRounders and my brain can’t do all the math necessary to keep these things separate.

You know what my favorite thing about Billions is? I’ll tell you. There are exactly two kinds of conversations on the show: ones where two people are trying to ruin each other and ones where two people are conspiring to ruin an off-screen third party. It’s delightful. Sometimes the people they’re ruining are innocent civilians, too. Or at least as innocent as anyone gets on Billions. At one point in the show’s run, Wags leaked a lawyer’s affair to the New York Post just so he could swoop in and steal a burial plot from him. At another point, the entire trading floor whooped into a rowdy cheer upon seeing a rocket explode during launch, because they had shorted the SpaceX-style private company that bankrolled it.

Pretty rough, huh? Well, get this: Those two points I mentioned were separated by about 11 minutes of screen time. They were in the same episode! And the fake Elon Musk who ran the fake SpaceX, the character who blew up and died in the explosion, was played by James Wolk, who played Bob Benson on Mad Men and Jackson Oz on my beloved Zoo. Some kind of career that guy has. Shoutout to James Wolk.

It’s weird. The people are all awful and their actions are almost relentlessly deplorable. I am personally against everything everyone on the show stands for. And yet, it’s one of my favorite shows. I’m not being tongue-in-cheek, either. Maybe a tiny bit, but that’s it. It’s the same thing I feel when I watch Succession. There’s a voyeuristic quality to it, watching these privileged goons rip each other to pieces. It’s cathartic at times. And fun. And sometimes Paul Giamatti gets wrapped up in leather bondage gear and dominated by his wife, which is a heck of a thing to see if you don’t know it’s coming. And the show moves at about 300mph so there’s not really any time to stop and question your feelings about any of it. Sometimes that’s all I ask for out of a show, you know? Fast mean fun with people I despise. Gimme.

Read the rest of the original article at Uproxx