The Showtime Series Returns For Its Fourth Season Sunday, With More Greed, Lust and Paul Giamatti 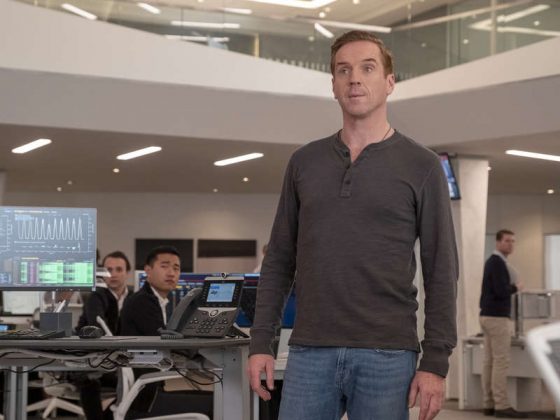 Prestige TV is the defining art form of America right now, as the streaming wars offer up a endless array of shows that probe the intricacies of gender, sexuality, race, class and identity. But for all it’s gained in thoughtful new voices and delicately drawn artistic masterworks, TV has lost one of its best categories, which I can only describe as “Prestige Trash.”

These are shows that sit at the center of the Venn diagram of Important and Addictive. They are widely popular with big and broad elements such as lots of sex, violence money or glamour. They’re not the brainiest, but have enough insight to be thought-provoking while containing enough candy to keep you hopelessly hooked. These days, their ranks are almost entirely populated by comedies or reality shows, though shows like “Stranger Things” or “Mr. Robot” help broaden the field.

Given that, I’m a bit befuddled as to why Showtime’s “Billions,” the rare drama that’s equal parts prestige and popcorn, isn’t a megahit. Perhaps it’s because in an age of clearly drawn comic-book heroes and evildoers, it’s the rare show with the audacity to make nearly every one of its characters a villain. A “Dynasty” for the decade-long bull market, it’s lurid and pulpy, covering serious topics but disinclined to take itself too seriously — a combination that’s accidentally made it one of the more relevant depictions of our greed-fueled society.

“Billions,” whose fourth season premieres this Sunday, March 17, is centered on the struggle between two men drunk on money and power. Billionaire hedge-fund titan Bobby Axelrod (“Homeland” charmer Damian Lewis) cheerfully flouts insider trading laws to make his nut, while dogged U.S. Attorney Chuck Rhoades (Paul Giamatti, in a performance that can only be described as Infinite Giamatti) is determined to take him down.

The twist: Chuck is a deeply cynical horse-trader from the kind of old-money WASP stock that clogs the corridors of power, while gregarious, generous Bobby is a salt-of-the-earth macher who came up hard(ish) on the mean streets of Yonkers.

Who to root for among this hateful trio? Everyone; no one; certainly not the general public, which is always the real, unspoken victim of Bobby and Chuck’s manipulation of the markets. But rather than offer a serious-minded look at how power corrupts absolutely, Billions is focused on how absolutely fun it is to be corrupt. It’s a twelve-dimensional chess game where the two kings are so deadly focused on each other, they often forget to notice their knights and rooks capering around the board, going completely bananas in the heat of battle.

The show’s greatest strength is this overstuffed, overeducated supporting cast of kooks. Most of them would have been right at home on one of David E. Kelley’s ’90s legal dramedies, were it not for the fact that they speak in gleefully profane, pop-culture-crazed quips that play like Bill Simmons aping David Mamet. Their ranks include David Costabile as Bobby’s cheerfully arrogant consigliere; Jeffrey DeMunn as Chuck’s father, a conniving charter member of the old boy’s club; and Condola Rashad as Chuck’s duplicitous junior attorney, who needs to play the game without crushing her own political aspirations. Just the bros on Bobby’s trading floor, from a penny-pinching bigamist with anger issues to a sad-clown slacker with the major hots for Wendy, could stock a winning workplace comedy. And since one of the protagonists is a billionaire, you quite literally never know who’ll have a guest spot: Kevin Durant, Maria Sharapova, the real-life founder of Spanx and the viral chef known as “Salt Bae” all popped up in the last season.

Read the rest of the original article at San Francisco Chronicle