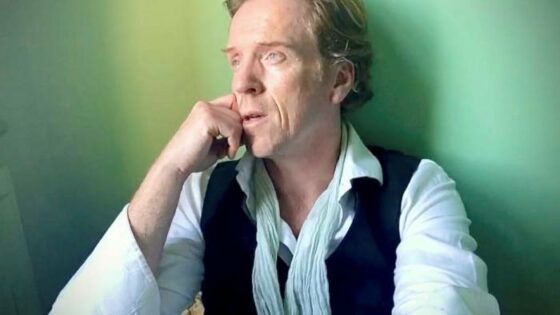 It would have been a strange sight, if anyone had been there to witness: actor Damian Lewis, up a tree in his garden, reciting Keats’s “Ode to a Nightingale” against a cacophony of banging and shouting from builders working next door. “Trying not to fall out of the tree or drop my laptop, talking about the melodious this, that and the other . . . very low-tech!”

The bicentenary of the death of John Keats falls today, and in a normal year, a new production of the play Lift Me Up, I Am Dying would have taken place in Rome, in the Keats-Shelley museum, located in the house where Keats died. As 2020 wore on with no sign of respite from the pandemic, it became clear this planned commemoration wasn’t going to happen.

Instead creator Pele Cox decided to reimagine the play as a half-hour film, with the actors filming themselves in lockdown and having production meetings via Zoom. The piece, based on the poet’s last weeks when he was devotedly cared for by the artist Joseph Severn, was originally performed in Rome in 2014, with Tristan Shepherd as Keats, and Cox’s regular collaborators Christian Roe and Nicholas Rowe as Shelley and Severn. This time, Rowe reprises Severn (to whose self-portrait he bears an uncanny resemblance), Roe takes on the role of Keats, and Lewis is stepping up to tackle Shelley.

“If Nick hadn’t called me up and said, did you know that it’s the 200th anniversary of Keats’s death, February 23 might have passed me by without me giving it much thought,’ says the Billions star in a Zoom interview with the rest of the group. “So it’s nice to mark it. For literary and academic reasons, I get a kick out of anniversaries.”

The Ludlow-based production team, comprising Cox, documentary-maker Thomas Painter, and visual consultant Fabio Barry, a Stanford art history professor (and, in private life, Mr Pele Cox), have been pulling all-nighters to finish in time for a virtual premiere on the anniversary. All words the actors speak come from the original poems, letters and journals, with one exception: Cox commissioned me to write a short poem inspired by Keats, to be read by the actor Simon Manyonda.

While most scenes are filmed in interiors, Manyonda scouted outside locations. “I really didn’t want to do it just to the phone, I wanted to try and make it as theatrical and dramatic and as cinematic as I possibly could. So I went to the Thames, as close as I could get to being at ‘Tower Dock to Gravesend’ [where Keats embarked for Italy]. There in the bracing cold I couldn’t help but imagine that this man had left from here. And then spending a few days in Nunhead cemetery and being around all those cold slabs, leaning on them, sitting on them, saying those words over and over. It was a really strange experience.”

Roe, currently based in Antwerp, provided a particularly haunting sequence on a tram, wearing a face-mask that seemed to bring together Keats’s fatal tuberculosis and today’s lethal pandemic.

“I spent quite a lot of time wrestling with the lines, trying to understand them [Keats and Shelley],” says Roe. “Trying to keep up with their brains. It was exhausting! A real privilege but knackering. Thinking in metaphors and symbols, visions . . . It’s such a pleasure to do something that we would have done anyway, pandemic or not. At a moment where we’re surrounded by death, and confronted with a lot of doubt and uncertainty, it’s a time where we need, even more than usual, leadership and imagination, and courage and conviction and radical thinking.”

As literary consultant, my role was to give the actors notes on the relationship between the poets — Keats and Shelley were rivals rather than best buddies — and comment on the “rushes”, whether Lewis reading “Adonais” in his kitchen, or Rowe trying multiple takes by candlelight. For the dialogue, the challenge is to make it look as though the actors are in the same space, matching the lighting and eyelines. Rowe observes: “There’s not masses of time to do this, we’re not in the same room. Keats, Shelley, Severn, Simon’s character and Désirée’s dancing, we all have a different part to play.” (Désirée Ballantyne, a former soloist with English National Ballet, plays the embodiment of Keats’s distant love obsession, Fanny Brawne.)

“I have to say I’m very glad I’m doing this with friends,” Rowe goes on. “It’s very much trial and error and it’s tricky. It’s a lonely business. I’ve enjoyed this process very much but it does also make me want to be in a room with you guys, sorting things out in a different way.”

“It reminds me of being a student again,” says Lewis. “Just being creative with not very much and I’ve missed that. Just to devise things again, and of course this will be better than when we were students because we’ve got Pele, Tom and Fabio to put it together, and we’ve got an already existing text that’s good and vibrant and has a story to tell.”

Lewis was not a Shelley aficionado before joining the project. “I didn’t know a lot about him except that he went to the same school I went to.” (Eton.) “He was always more difficult to read than the other Romantics because his poetry was so laden with classical imagery. Apart from ‘Ozymandias’, which I love, I’ve always struggled with Shelley.” Byron is more his style: “His rock and roll-ness and relationships made him interesting and fun. But beyond that, the Romantics . . . It’s easy to attach to them as an adolescent because they are exactly the way that an adolescent thinks. Live fast, die young, walk around mooning . . .”

The others start laughing, each in their Zoom squares. “Not showing your bottom to people! Although there was a bit of that . . . Did I go deep into the Romantics? No, I don’t think I did. Pele invited me to get involved via Nick and I just thought, what a lovely thing to do, for some of the reasons Christian was talking about. In this rather bleak time, it’s nice to revisit this group of men.”

Read the rest of the original article at Financial Times here