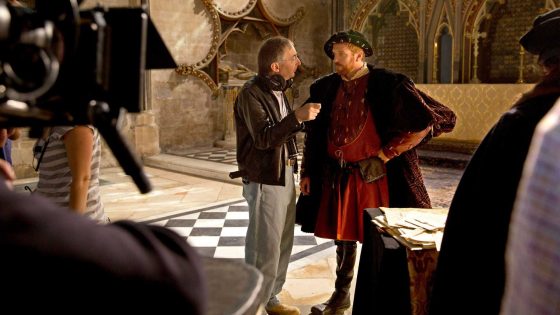 Where does that allure from all these television and film adaptations of the Tudors come from? Their mere existence. For those of us who were raised here in the United States, we have never lived under monarchist rule. Therefore, that very precariousness of life under this type of government is something we can’t fully grasp. Those stories told of imprisonment, passion, treason, and execution by the crown from hundreds of years ago has us hooked. But let’s be frank: That’s only part of what keeps us coming back for more. We also love the salaciousness, the sex, betrayal, failures, triumphs, and the clothes! We all find these legendary accounts to be even more deliciously wicked when everyone is trussed up in codpieces, doublets, corsets, and farthingales.

With Starz’s Becoming Elizabeth now here, Tudor Fever is once again on the rise. Short of finding a time travel machine to return to the Middle Ages and the Renaissance, below is a list of some of the most entertaining, mind-blowing depictions of those tempestuous Tudors to come across both the big and small screens.

The character roster in most Tudor dramas is unchanging, so this series is a breath of fresh air by focusing on someone on the fringe of those rascally royals. Based on Hilary Mantel’s 2009 book of the same name, Wolf Hall once again delves into the romance of Anne Boleyn and Henry VIII, but from the point of view of his chief minister, Thomas Cromwell (played by Mark Rylance).

Cromwell must contend with both Henry (Damian Lewis, a perfect casting choice based on looks alone) and the outspoken Anne (Claire Foy, who breaks out a fabulous French accent at times) pertaining to the “Great Matter,” the term coined for the arduous process Henry undertook to have his marriage to Catherine of Aragon annulled so that he could wed Boleyn. Cromwell is caught in the middle. As a commoner who has risen to a very powerful position, he knows he could lose everything should he give the wrong advice as Henry considers breaking from Rome and establishing the Church of England (a Catholic / Protestant divide that would dominate the reigns of subsequent Tudor monarchs). While the subsequent books that make up Mantel’s trilogy have yet to be adapted for the small screen, those who are searching for a point of view into the Tudor court from a person outside the family will appreciate this understated, yet gripping miniseries.