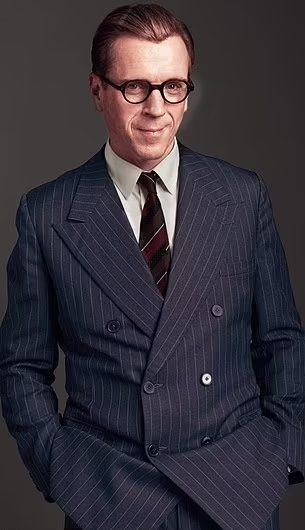 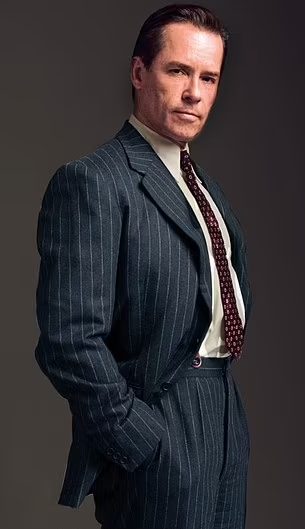 Based on the non-fiction book by master storyteller Ben Macintyre, the show centres on the lesser-known tale of the close friendship between agents Kim Philby (Pearce) and Nicholas Elliott (Lewis).

As the drama opens in January 1963, Elliott is reeling after discovering that his best friend and colleague of 23 years, Philby, has been a traitor all along and has defected to the Soviet Union, betraying him as well as his country. In flashbacks we see how their friendship developed into a deep bond despite Philby’s secret treachery.

Pearce confesses he was agog at the story. ‘I spent the entire shoot having moments every few days thinking, “I can’t believe this actually happened,”’ he says.

‘I can’t believe that for 30 years he was able to get away with this. It’s well referenced in our story that the elite class in Britain on some level had become lazy.

‘Once they knew who your father was, once they knew what school you went to, they tended to just immediately go, “Oh, well, you’re one of us.” Philby and others exploited that.

Philby was part of the infamous ‘Cambridge Five’, a group of double agents that also included Guy Burgess, Donald Maclean, Anthony Blunt and John Cairncross, all of whom attended the elite university’s Trinity College and were at some point recruited by Soviet intelligence.

They all pursued successful careers in the British government and from that privileged position obtained and passed large amounts of information to the Soviets. Philby began working for MI6 in 1940 and soon struck up a friendship with Elliott, another former Trinity student.

In A Spy Among Friends, screenwriter Alex Cary deals with the immediate aftermath of Philby’s defection and how it wasn’t what the traitor expected. ‘Rather than the hero’s welcome he may have been expecting, he’s interrogated by a sceptical KGB officer,’ says Cary.

Philby tries to convince the Russians that he’s still at the top of his game as a spy, ‘which is a sort of sad and slightly pointless fight because he never really spied again. He just died of drink [in 1988]’.

The project reunites Damian Lewis with Homeland writer and producer Cary, who offered him either of the lead roles. ‘I think quite quickly we realized that actually I wanted to play Elliott,’ muses Damian, 51.

‘Because although Philby is the rock star – he’s brilliant, charismatic, urbane, but he’s also a traitor, cheat and liar – I wanted to play the guy that we knew less about, his best friend.

‘Elliott’s arc is tragic because of his adoration and love for Philby, he really facilitated his treachery over the 30 years. He kept excusing him, kept defending him every time it seemed Philby would be exposed.

‘If Elliott had cared to look a bit closer, I think he might have seen something,’ continues Damian. ‘But I think at every opportunity that he might have looked closer, he didn’t.

‘He was just blinded by that [old boys’] code and by a deep-seated romance, and love, for this man that everybody loved.’

Ironically, Damian himself was part of that old boys’ network. He went to the poshest of public schools, Eton College, attended by the Cambridge spy Guy Burgess as well as former prime ministers Boris Johnson and David Cameron. Damian has previously spoken of his Eton career.

‘That confidence is instilled in you [by the school],’ he has said. ‘When it’s perverted in any way it becomes entitlement, it becomes arrogance.’

He says his parents instructed him to keep his privilege in check always.

Interestingly, Guy Pearce, 55, says he experienced something similar as a pupil at one of Australia’s posh public schools – the private Geelong College, near Melbourne.

‘It’s over 150 years old and bases itself on that very British tradition of boys’ school, elite, establishment privilege,’ explains Pearce.

‘There is this underlying belief that if you are there, you’re protected forever, and that your loyalty is unwavering. And that the way in which you view the world is from above.

‘So, on some minor level, I lived the experience that perhaps Philby might have experienced himself.’

Pearce was born in Cambridgeshire – his mother is English – but the family moved to Australia when he was three. As a result, he says, getting a handle on Philby’s posh accent proved troublesome.

‘I felt like I could get into it quite easily,’ he says of the accent. ‘But then I listened back and I heard the Australian influence come into it sometimes.

‘I didn’t have a dialect coach as such, certainly on set, but if there were things that stood out, [director] Nick Murphy and Alex [Cary], who himself is highly educated, would point it out to me. I felt like I was slightly out of my depth, but I was in good hands.’

To help with telling the story, Cary invented a character, Lily Thomas, played by Anna Maxwell Martin. Lily is an MI5 agent from the northeast, who is brought in after Philby’s shock defection to investigate whether Elliott knew of his friend’s traitorous activities.

She serves as a counterpoint to the old boys’ network and is an ambitious female navigating a man’s world.

‘She’s a woman. I wear lots of dowdy, woolly tights! But she’s really clever and she knows how to infiltrate what is going on with Philby.’ 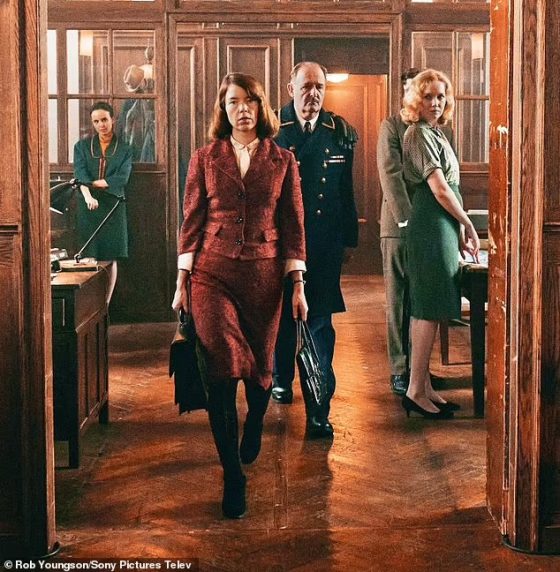 Anna wasn’t new to the story of the Cambridge spies – her late ex-husband, Notting Hill director Roger Michell, was a history buff. They had divorced in 2020 before his untimely death last year.

‘I wasn’t completely ignorant because my late husband was obsessed with spying and prisoner of war camps and that kind of thing, so we have a lot of literature in the house,’ she says.

‘In fact, we had Ben’s [Macintyre] book in the house, so I knew a bit, though I’m too busy watching Married At First Sight to be reading that kind of thing!’

The character of Lily is intended as a comparison to the posh men who had been running the country for eons, explains Damian. ‘She enabled us to tell a particular story about a changing of the guard,’ he says. ‘About a generation of white, upper class dinosaurs who’d been responsible for two world wars, failed intelligence missions, one after the other, and had curated and nurtured our most famous-ever double agent.

‘The redemptive thing for Elliott is that he has the foresight and humanity to recognize in this young, female MI5 officer that here might be a way forward – he sees in her someone rather brilliant; he sees the future, I think.’

Chiefly, A Spy Among Friends examines a platonic bromance that was ruptured irrevocably by the most terrible of betrayals. Damian Lewis found that he and Guy Pearce didn’t have to manufacture their chemistry for the cameras, either, as they bonded easily over a shared love of music.

Both play guitar – Damian has announced plans to release his first music album next year, and singer-songwriter Pearce has released two albums.

Damian says, ‘Guy as Philby was very easy to get romantically involved with! He’s a lovely, egoless man who didn’t bring any airs and graces with him and just wants to do the work and is committed and serious.

‘He’s an immersive and nuanced actor – perfect for Philby. As it happens, he loves The Beatles and he plays the guitar a lot. We talked about that all the time.

‘We were going to inflict ourselves on everyone at the wrap party and play some Beatles together on our guitars, but we never had any chance to rehearse – which is really disappointing to me. That’s a concert we still have to give.’

The world is waiting!