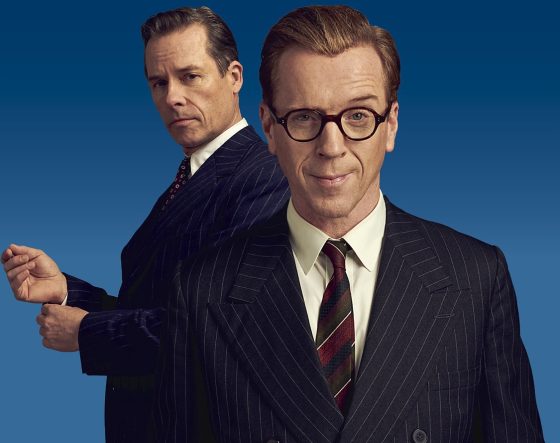 Partly, this is because the show’s creator Alexander Cary (who worked with Lewis on Homeland) is chiefly interested in the way Britain’s Old Boy network both facilitated and was then shaken to the core by the betrayal. If a chap had attended the right school and college and belonged to the right clubs, he couldn’t possibly be a rotter. A quick glance at the way the UK currently operates suggests this attitude hasn’t gone away and is ripe for re-examination. But a drama about Philby’s defection isn’t necessarily the best way to do it.

Cary’s story is based on Ben Macintyre’s factual account of Philby and Elliott’s relationship but fictionalized and expanded. His main invention is Lily Thomas, played by Anna Maxwell Martin. As a Geordie woman working for the snooty SIS’s ‘peasant’ rivals MI5 and married to a black doctor, she represents the forces of change that were supposed to sweep away the old order (but didn’t).

Lily interrogates Elliott at length about his recorded conversations with Philby in Beirut, which we also see in flashback. Meanwhile Pearce’s truculent Philby is aggressively debriefed by Russian officer ‘Sergei’ on a train. So three plot strands involve pairs of people muttering tersely at each other in confined spaces. Further flashbacks chart the course of Philby and Elliot’s earlier friendship.

The dialogue is heavy handed. After a gentleman’s club is hit by a bomb in the Blitz, Philby drags a waiter from the rubble and orders a couple of pink gins. “Are you a member, sir?” comes the reply. Director Nick Murphy also loves a mid-sentence pause. “Espionage can at times be… intoxicating,” Elliot tells Lily. “Isn’t this what you chaps call… chickenfeed?” she asks him, brandishing Philby’s confession.

There are extremely heavy hints in the script that Elliot is secretly besotted with Philby, though both married and were ostensibly straight (and Philby is here shown enthusiastically shagging a female resistance member in snowy wartime Vienna). This may be a back-reference to the fact that other members of the Cambridge Five, Anthony Blunt and Guy Burgess, were gay, and a third, Donald MacLean, was bisexual: this knowledge partly sparked an enduring prejudice in the security services that homosexuals were untrustworthy, or at least susceptible to blackmail. Or it may be a variation on John Le Carre’s thesis that the intense relationship between agents border on the romantic.

Either way, it’s laid on with a trowel, and it means another layer of repression is plastered onto Lewis’s already buttoned-up performance. Pearce gets to perform more dashing exploits but his dialogue is similarly bitten-off. Maxwell Martin’s Lily is relentlessly stony at work. It’s all so po-faced that lighter moments – a Morecambe and Wise variety routine; Ian Fleming watching an agent emerge in dinner clothes from a diving suit – feel shriekingly off-key. Terrific cast…