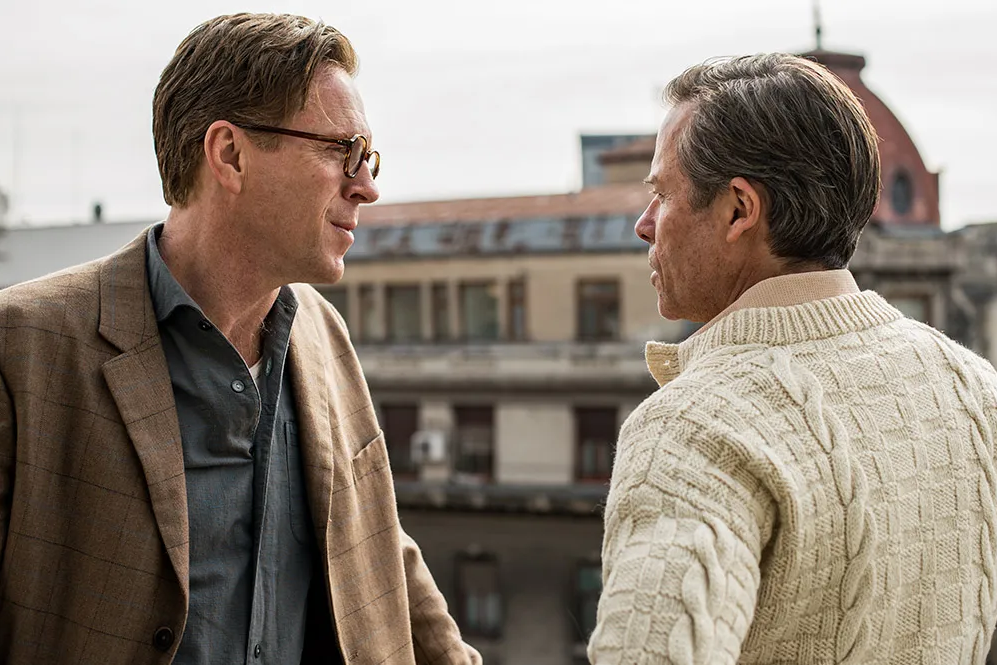 A Spy Among Friends’ Damian Lewis and Anna Maxwell Martin tell Rachael Davis about the ITVX series’ true story of espionage and betrayal.

It’s 1963: the height of the Cold War. International politics is fueled by secrecy and duplicity, as psychological warfare, propaganda and espionage – not to mention the latent threat of nuclear attack – keeps world leaders looking over their shoulders and into the shadows.

In England, Nicholas Elliott, played by Damian Lewis, is working for MI6 as an intelligence officer. He has a very close, long-standing friendship with Kim Philby, his colleague in intelligence.

Elliott is left in turmoil when he discovers that, for decades, Philby has been a double agent, secretly spying for the Soviet Union’s infamous security agency the KGB.

The true story explored in A Spy Among Friends, a gripping new drama adapted from Ben Macintyre’s novel of the same name by screenwriter Alex Cary, is a captivating one – not least because of the effect Philby’s betrayal had on international relations, but also the tragedy it brought on Elliott and others close to Philby who were duped and deceived by the double-agent.

“That’s exactly why you become an actor: you hope to get scripts that are complex and nuanced and challenging. And Alex wrote that,” says the series’ Primetime Emmy and Golden Globe-winning star Lewis, 51.

“And at the centre of this particular story was this beautiful and sort of tragic, sad relationship really, between Nicholas Elliott and Kim Philby, who myself and Guy Pearce play,” he adds.

“It was interesting, coming in (to) a very well known personality through a less well-known character: his best friend Nicholas Elliott, that no-one knew anything about, who really represents all of us. The one betrayed by an extraordinary charismatic sociopath.

“I wanted to play him rather than – which you might think is odd – rather than the extraordinary sort of sociopath. It’s always interesting to be the guy who was devoted, and loyal, and utterly blinkered.”

Pearce, best known for his starring role in Christopher Nolan’s 2000 film Memento, had the challenge of portraying the subtle duplicity of a man who’s been betraying his closest friends and his country for decades, working closely alongside Lewis to tackle the programme’s complex themes of loyalty, trust and male friendship.

“Complex themes and complex characters need talented actors, and he is one – and also, now we know, just a lovely bloke to boot,” Lewis says of Pearce.

“It was a joy from start to finish, working with Guy, who’s a really subtle and nuanced actor, which is exactly what you need for a guy who is successfully betraying his best friends for 30 years, and his country. He did that brilliantly.”

Writer Cary, who is a “big fan” of Macintyre’s books, says that it was a particular challenge to adapt A Spy Among Friends because he didn’t want to “just regurgitate the book”.

“What the book, I felt, gave me was a launching off place from which I could explore, with my imagination, the fallout from a true story,” says Cary, who also worked as a writer and producer on espionage thriller series Homeland.

“And that was by creating the Lily character, who is the one fictional character in this. And as soon as I figured out who she was, and her way through the story, that was the key for me to adapting it.”

The fictional character of Lily Thomas works for MI5, and is brought in to investigate Elliott’s involvement in Philby’s defection to the Soviet Union.

“She’s appointed because she’s sort of a wolf in sheep’s clothing,” says Anna Maxwell Martin, who plays her.

“She looks very unassuming. She’s a woman. I wear lots of dowdy, woolly tights! But she’s really clever and she knows how to infiltrate what is going on with Philby.”

It was interesting, Maxwell Martin says, to play someone who’s “completely underestimatable”.

“Literally, how much of a snooze can you be so that everyone will underestimate you?” the 45-year-old laughs.

“But do you know what’s so super about this character? She really is sort of devoid of insecurities. She’s not questioning her self-worth all the time.

“It’s really super refreshing to play a female character where you’re not having angst all the time.

“She’s a total straight player. She believes in her ability. And so yes, she’s sort of unassuming or they underestimate her. But actually, she doesn’t feel that, she doesn’t own that, they can all think that, that’s great. But she’s devoid of that. I love that.”

Romania was chosen as a filming location for A Spy Among Friends, and the production was based out of Bucharest – a kind of chameleon of a city, as Lewis explains, for several of the programme’s city settings.

“It actually was fantastic filming there,” says the star.

“I’d never been. And Bucharest is sort of what you’d expect: It’s a conflation of brutalist Soviet-era buildings and some beautiful sort of 17th century Baroque buildings.

“Bucharest actually ended up being our location for four very, very different cities and countries – for Moscow, Berlin, Istanbul, and Beirut – and you are able to film all those places in Bucharest. So, quick advert for the Romanian Film Board! It’s a good place to go, and we had a ball.”

The filming location was just one consideration for Bafta-winning director Nick Murphy, who worked to ensure that the audience felt the gravity of what was happening because it was set so clearly in the real world.

“I think the main thing is to make sure you do embrace the realities of things, and make sure they happen in a world that genuinely exists,” he says.

“We’ve worked very hard to make sure all these characters, and the spy story, exists in a world that is evident all the time, the real world is going about its business.

“There’s a nurse in the street, the kids are playing, there’s stuff going on. Of course we bring symbolism into all of that: frequently it’s two boys playing together, because it’s obviously what’s going on in the heads of the characters.

“But the real world is always evident. It’s visible outside cafe windows, it’s visible from car windows, we don’t hide away in a spy world. To make that feel factual and make that feel real is to place it in a world that is otherwise unaware of what’s going on.

“And I think that brings up the texture of it, and actually, weirdly, the jeopardy of this ridiculously historic story.”

Read the rest of the original article at The Herald Scotland