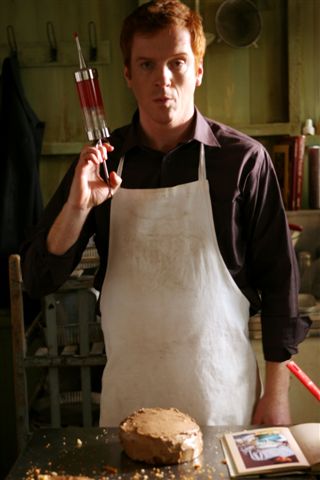 » Distributor Bankside Films have updated their web pages for The Baker, the new film written and directed by Gareth Lewis and produced by Damian Lewis and Adrian Sturges for Picture Farm, in conjunction with Grandville Pictures. The site offers a hilarious trailer, high resolution photos, the movie poster, and more!

» The film stars Damian Lewis as a hitman named Milo Shakespeare who is hiding out in a Welsh village as the new baker; Damian’s co-stars include: Kate Ashfield as Rhiannon, Michael Gambon as Leo, and Nikolaj Coster-Waldau as Bjorn. Fans of the BBC’s production of Shakespeare Retold – Much Ado About Nothing will also be pleased to see that actor Anthony O’Donnell (Mr. Berry, the very comical security guard) also appears in the cast of The Baker.

» The production notes for the movie provide some great quotes and lots of information – including the many, varied jobs previously held by Gareth Lewis, the news that Adrian Sturges appears in the film as a store clerk, and Damian’s reminiscences about creating adventure stories with his brother Gareth, when they were youngsters riding around on their Grifter bicycles.

» According to the production notes the “story has a number of layers, a broad, romantic comedy, slipping between subtle and slapstick and, all the while, underpinned by the rather nasty art of murder.”

» Click here to view screencaps from the trailer that were created by Selene; and click here to view the new, hi-res photos of Damian that have been added to the end of the “Production & Promotional Images” album at the Warehouse Gallery.