» Click above to see the “teaser trailer” for tonight’s Life episode number 2.21 titled “One” and thanks once again to Kateblake_2000 for posting the trailer online.

» Click here to listen to an interview with Damian Lewis discussing Charlie Crews, his character on Life. Warning, there’s some profanity!

The great mystery of “Life” is why it isn’t a big fat hit. The cop drama/transcendence tale that comes to its seasonal, and perhaps (cue critical wailing and gnashing of teeth) final, end tonight has all the ingredients of a successful show…There’s the terrific writing …And, of course, there’s the great cast: Lewis is a marvel, with credits that include “Band of Brothers” and “Masterpiece Theater…how is it that this show founders… So if, as rumor has it, this is it for “Life,” I invite representatives from all sides of the issue to chat with me, in these pages, about what the heck went wrong…

» TV Guide critic Matt Roush offered these comments about the future of Life:

Question: What can be done to save Life? It’s a phenomenal series with outstanding actors (especially Damian Lewis), intriguing plot twists and an artful blend of sly wit and great staging (the use of dark and light, good and evil, chaos with the zen). For those of us who have little to watch on commercial TV, please listen!!!!

Matt Roush: I’m listening, and I wish more TV viewers would as well. (Seriously, what makes the revolting and woodenly acted Criminal Minds more of a draw on Wednesdays than this clever piece of L.A. sun-drenched noir?) The good news about Life is that, unlike nearly everything else except 30 Rock on NBC, it has something of a thriving critical reputation—Life made it onto the AFI top-10 list last year—but that may not be enough to help it escape the doldrums that’s dragging down the entire network. (Saddling the show with lead-ins like the mercifully defunct Knight Rider and The Chopping Block hasn’t helped much, either.) With fewer slots available to dramas next season thanks to the brilliant Jay Leno five-nights-a-week scheduling, Life’s life span is obviously in danger of being cut prematurely short. Keeping fingers crossed until May, when we’ll know more.

» Rand Ravich, the creator and executive producer of Life and Damian Lewis (the star of the show) recently gave an interview discussing the season finale and future opportunities. Click on the links below to read various articles based on this interview, including the intriguing comment from Damian that “three studios were in a holding pattern about whether LIFE renews or not.” 😀 l 1 l
2 l
3 l
4 l

» Warning to all women of child-bearing age! Close proximity to Damian Lewis can cause spontaneous ovulation! Stay away from Damian if you wish to avoid pregnancy! 😆

According to an unconfirmed report posted on IMDb by scubadude44, Gabrielle Union is the 3rd actress on Life (after Jennifer Siebel and Sarah Shahi) to announce that she is expecting a baby! Congratulations to Gabrielle and her family! 🙂 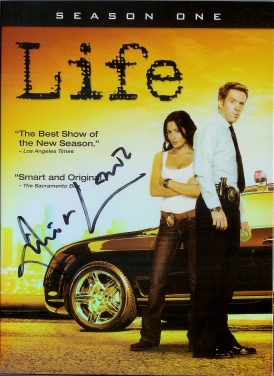 » One more day to enter to win the Life – Season One region 1 DVD autographed by Damian Lewis! The DVD contest is only open to residents of the US and Canada and has been extended for one more day; the new deadline is April 9th at 11pm ET. Don’t forget to also enter to win the autographed Life poster! The poster competition is open to Life fans everywhere; click here for information about both contests.