Even though Brody’s wife, Jessica (Morena Baccarin), and two children are shocked, they are happy to learn that he is still alive. However, brilliant but volatile CIA Agent Carrie Mathison (Claire Danes) isn’t buying his story, instead believing that Brody has been turned and is now working for Al Qaeda. With America’s national security at stake, what follows is a dangerous game of cat-and-mouse, leading everyone Carrie knows to question whether her conviction is based on fact or is the product of a delusional obsession.

During a recent interview to promote the original series, London-born actor Damian Lewis talked about being attracted to this story because he enjoys the contradiction that someone could return a hero but possibly be the villain, how thrilled he is to be a part of a compelling American TV series, how important the reality of the torture scenes are, and that cable shows his ass much more than his previous television projects ever did. Check out what he had to say after the jump: 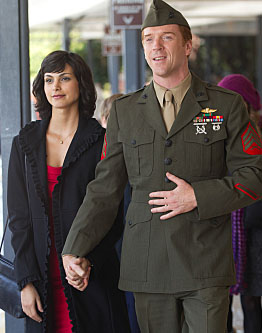 Question: What attracted you to this show and this character?

DAMIAN LEWIS: Well, what I read was a thrilling psychological and political thriller with a CIA agent convinced that this hero who returns, having been a POW with Al Qaeda for eight years, might have been turned by them and is a terrorist. I just enjoyed the contradiction that someone could return a hero in the nation’s eyes, but possibly not be that person. That is a thrilling premise. That is a great set-up, for any show. As the first chapter of your novel, that takes you to the next chapter.

This show is not just about the CIA catching terrorists. It’s not about that. It’s a character piece. It’s about more complex issues. It’s about family and identity. It’s about identity on a political, national, spiritual, and faith-based ideological level. It’s about identity on a more intimate, localized level, in regard to family and relationships with your loved ones. It also deals with mental frailties. It deals with mood disorder, in Claire Danes’ character. It deals with post-traumatic stress disorder, in my character. It deals with how one reconnects with family. The motif of parents and children runs through the piece. As fun as it is to just be in a thriller, where you jump from one incident to the next, I was intrigued by the fact that it wanted to tell a broader story as well.

If you’d gotten the same role and it was 22-episode run that was much more grueling and a much bigger commitment, would you still have been interested in the part?

LEWIS: That is a conversation that the networks have repeatedly, as to whether they should start producing 12-part series, instead of these 22 to 24 episode series, in order to get the stars to come do their shows. It’s a big commitment to ask someone to work on one role for nine or 10 months of the year. It does affect your decision-making, definitely. 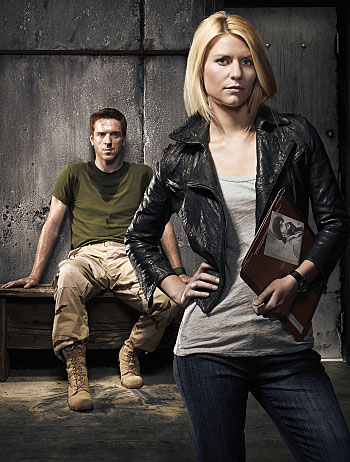 How do you compare this to previous roles that you’ve played?

LEWIS: Oddly enough, there are similarities with this show Life that I did for NBC, a couple years ago, about a man who goes away. In the case of Life, he was sent to prison and spent 12 years there, and came back a changed man, in some way, from his experience. In this show, he’s a prisoner of war for eight years, and he comes back a changed man. I’m still very sad that Life didn’t go longer. It was one of the better shows on TV, that year. If you look at what NBC had, it was definitely one of the better shows that NBC had. NBC was crazy to cancel that show.

In England, we can’t make this kind of TV. We don’t have the resources. We actually don’t have the writers to write it. We don’t have film and TV language in our DNA, in the same way you guys do here. The big concept, in telling it compellingly and entertainingly, but in a psychologically real and complex way is something we don’t come up with as often as you guys do. So, for me to be here is a thrill.

Do you feel that cable is a little bit more freeing?

LEWIS: Well, they show my ass a lot more. I’ve noticed that. And, I’ve seen Morena’s tits, and that’s weird. But, that’s Showtime. No. If cable wants to distinguish itself from network, just by showing tits and ass, literally, then that’s sad. At times, you do wonder, if that’s the only distinction. It’s like, “Well, we haven’t seen anybody’s bottom in three episodes, so we need to write that scene.” But, is that really so important? No. For personal reasons, because I’m a Brit, I live in London. I don’t mean this grandly, but it was never my intention to live in L.A. and do a big network show. I did Life because it was just so good and I couldn’t say know to it. I really just wanted to do it.

Where do you shoot Homeland? 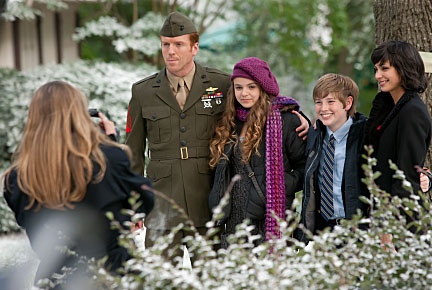 LEWIS: I love it! We’re really enjoying it. My wife and kids are with me, and we’re having a great time. 100% humidity is great. I can barely walk down the street. I’m crawling on the sidewalk, by the end of the day. But, I’m thrilled. I realized how lucky I was to be on a great cable show like this. It was something I couldn’t say no to. I had said to my agent, “Look, if a great cable show comes along, let me know, but a big network show is just going to be more problematic, from a family point of view. We’re not all just going to go and live in L.A. for seven years. I don’t think that’s going to happen.”

The relationship between your character and Morena Baccarin’s character, as husband and wife, is very complex. How will that progress, and what’s it been like working with her?

LEWIS: That’s all too real. I think servicemen and wives, all over the country, if they watch this, will recognize that relationship, coming back from a war zone, particularly if you’ve been a prisoner for eight years, which not many people have. It’s an extraordinary situation. He’s broken. He’s damaged. And, she has grieved for him, said goodbye and, in this particular case, taken up with a friend of his, who has become a surrogate dad to the kids. And then, he reappears in her life and it’s overwhelming for both of them. I’m glad that, so far, we seem to be addressing that in a serious way. 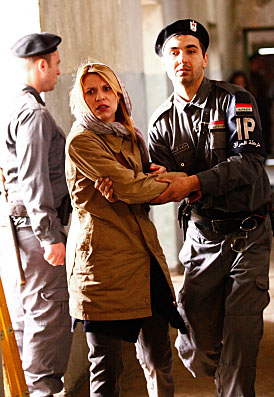 Morena and I joke about it. She says, “When are they going to be nice to each other? We’ve got another one of these scenes where it’s all just awkward and terrible and we can’t connect.” But, that’s real. Maybe they’ll never connect. The bleak version of the story is that they never get their family back together because the experiences have been too extreme and damaging for both of them. So, we’ll see. We really enjoy playing it ‘cause it’s fun. It’s character-driven.

As the series progresses, do your character and Claire Danes’ character cross paths more?

LEWIS: Yes, we do. She places surveillance in my house, semi-legally. That gets taken away by Mandy Patinkin, who says, “Enough is enough. Get that out of there. You’re on your own now. I’ve helped you all I can.” And then, she just tails me and puts herself in my way, like bait. She honey traps herself, and I go for it because I recognize in her a woman who has had similar experiences to me. I certainly am able to relate to this woman, in a way that I’m not able to relate to my wife, who hasn’t had an experience like I’ve had. From then on in, it gets interesting.

The torture scenes look appropriately grisly, probably even more so on Showtime than they were on 24. What’s it like to play those scenes where you’re getting tortured and covered in blood with a big, scraggly beard?

LEWIS: I have a three-year-old and a four-year-old at home, and my mornings are about just dealing with the fact of that. I oddly enjoy it. I was being peed on, only three mornings ago. I said, “I’m enjoying this. Is that wrong?” This character is so compelling that it feeds the psychology of the piece. It helps me because a lot of it appears in flashbacks, and I enjoy the way in which it informs the character, going forward. I don’t mind filming that stuff too much, weirdly, but I’m an exhibitionist. 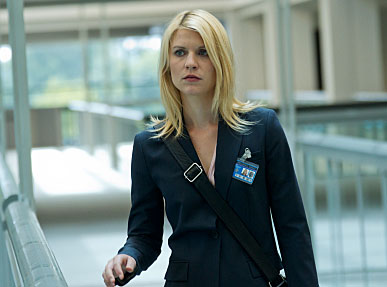 Do you try to get all of those scenes done in a block, or do you have to go back and forth with it?

LEWIS: They try to schedule it in my favor because it’s two hours of make-up, and then I lie down on a gritty, sandy, dirty, stone floor in some warehouse, just out of Charlotte, North Carolina. I’ve been hung upside down. I’ve been beaten in the head. I’ve been beaten with a club with barbed wire wrapped around it. We’re keeping it as real and as brutal as those things are. It’s not for sensationalist reasons, and it’s not for shock value. It has a strong psychological reason. It’s to break somebody physically, emotionally and psychologically, so he is then malleable. That’s really the purpose of it. It’s important to show it.

This is your third American show where you are either playing a military man or a man who is very good with a gun. What do you think it is about you that seems right for this kind of role?

LEWIS: American psychopaths. It’s the early Noel Coward plays that I did in the West End. I don’t know. I would say that this show is more realistic, but I don’t know why I seem to play Americans, convincingly. It’s a fluke, and it’s a lucky, happy fluke that I’m going to run with until someone finds me out.