From Recycling to Bicycling 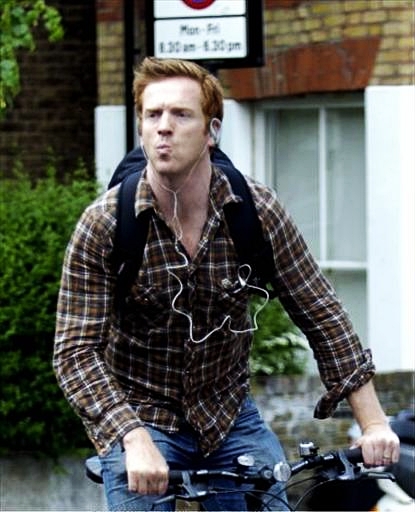 When he’s home in London, Damian Lewis bicycles everywhere because it saves money as well as energy. “We have a congestion charge in London. If you take your car to the center of town you gotta pay 15 bucks,” he explains, noting that parking is another $7 an hour. But lately, Lewis, who recycles wherever he’s living, is in North Carolina, shooting Showtime’s new drama “Homeland,” playing a Marine newly returned home after eight years as a POW and suspected of being “turned” by terrorists who held him captive.

“I enjoyed the contradiction that someone who’s a hero in the nation’s eyes could be that person. That’s a thrilling premise for any show,” says Lewis. “It’s not just about the CIA catching terrorists. It’s a character piece about multiple complex issues, like identity on a political, national and spiritual faith-based ideological level and mental frailties, and how one reconnects with family. As fun as it is to just just be in a thriller I was intrigued that it wanted to tell a broader story.”

His character, Sgt. Nick Brody, has come back to a wife who thought he was dead and has taken up with his buddy (Diego Klattenhoff). “It’s overwhelming for both of them and I’m glad we’re addressing that in a serious way,” notes Lewis. Other plot elements show him behaving erratically and resisting the Marine Corps’ wishes for him to be a poster boy for heroism and re-enlist, all the while being watched on planted surveillance cameras by CIA case officer Carrie Mathison (Claire Danes), who’s convinced he’s hiding something (one of the rather unexpected things he’s hiding is revealed at the end of the second episode).

Lewis, last seen on American TV in the NBC series “Life,” about a wrongly incarcerated cop who returns to the force after years in prison, sees similarities between that role and his current one, noting that both are about men held captive for a long time and return from the experience changed men. But “Homeland” being a cable show, there are certain differences. “I show my ass a lot more,” he laughs. Cable also doesn’t require the seven-year contracts common in network television. “That’s more problematic from a family point of view, because we’re not going to go live in L.A. for seven years,” he explains. “I told my agent, ‘If a great cable show comes along, let me know.’ I’m so lucky this one did.”

Read the rest of the original article at Mother Nature Network