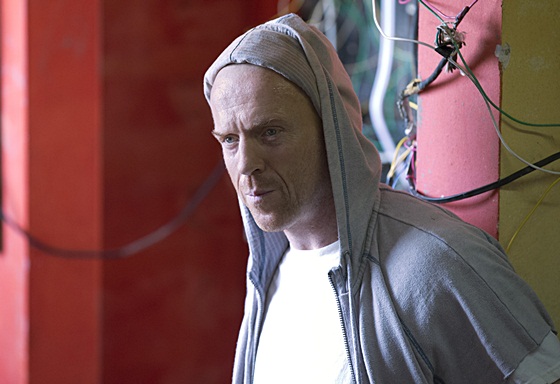 Brody is finally back on “Homeland” — and as star Damian Lewis promised, it was a devastating reveal — but will he ever really be back?

We caught up with Lewis to discuss “Homeland” Season 3, Episode 3, “Tower of David,” this week’s “very sad episode,” and whether or not Brody can cheat certain death once again to make it back to his old life — and back to sharing screentime with his partner in drugged-and-imprisoned crime Carrie Mathison (Claire Danes) and his family, including troubled daughter Dana (Morgan Saylor).

Keep reading for Lewis’ take on this latest twist, including his pessimistic outlook on Brody’s current state (“I don’t see Brody coming out of hell”) and his optimistic prediction about an inevitable reunion for Brody with both Carrie and Dana before this season is over.

Welcome back! We went from zero Brody to almost all Brody this episode — you promised that Brody’s reveal would be “devastating,” but was this one of the more grueling hours to shoot for you?
[Laughs.] Everyone keeps saying that. It was hot and dusty and perilous sometimes — it felt that way because we were quite high up in the abandoned building — but I have to say, you go into acting hoping that you get the opportunities to make episodes like that. It felt like a small movie, and a self-contained story. It really was great fun.

A small, very bloody, very violent, very drug-fueled movie … there’s a lot.
Yeah, there’s a lot, but you know … we know the “Homeland” viewers can take it. We’re not expecting the nuns at the convent to tune in to watch it. We know who’s going to come and watch the show, and hopefully it’ll be people who can stomach that kind of thing.

It’s a devastating personal trajectory for Brody. He has been blown from pillar to post. He’s like a tumbleweed. He’s a servant of so many masters, and has been ever since he was captured and tortured seven or eight years ago by Abu Nazir. So, you know, the culmination of his whole story is really in that moment when he picks up that needle and he sticks it in his arm. I think it’s just a cry for stillness and peace, and just a desire to stop running. He’s a guy who’s running on empty now, and it’s a real sadness.

You know, the broader political message is: Don’t send young men to war. Obviously “Homeland” is a fictional world, and we extrapolate from that and he’s gone on a pretty remarkable journey since then [laughs] … but he is a man who has had his identity taken away from him, and he really doesn’t know who he is anymore. He hasn’t known who he is for a long, long time. And he wakes up in this derelict tower, and now he doesn’t know where he is, and I just think he wants a moment of peace. I think it’s a very sad episode.