At the Alfred Dunhill Links Championship in Scotland this past October, we had a chance to talk golf with a couple of actors: Jamie Dornan, who stars in the uber-hyped movie “Fifty Shades of Grey,” scheduled for release in February; and Damian Lewis, who starred in the hit TV series “Homeland” and the award-winning World War II miniseries “Band of Brothers.” Dornan, 32, is from Holywood in Northern Ireland, the same hometown as world No. 1 Rory McIlroy. Lewis, 43, is from London. Dornan and Lewis played together in the pro-am portion of the Dunhill. 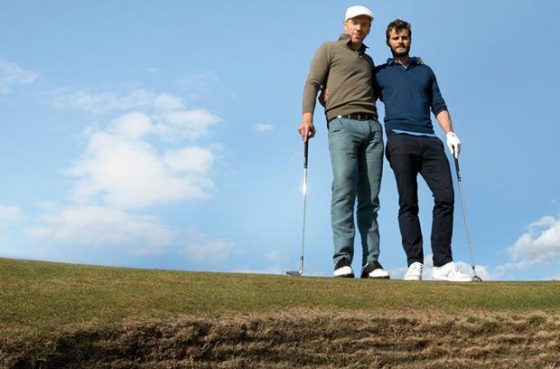 GD: Who were your golf idols growing up?

Lewis: Seve Ballesteros, obviously, was always very exciting to watch when I was a kid. Sir Nick Faldo was winning a lot for us at the time. Sandy Lyle for his 7-iron out of a fairway bunker to win the Masters in ’88. I liked a lot of the big players.

Dornan: Darren Clarke was huge for me. He’s from where I come from, and a few more boys from that part of the world are flying the flag now like Padraig Harrington, who I played with today, which was an absolute treat.

GD: What are some of your favorite courses?

Dornan: I play most of my golf at Wilshire Country Club in Los Angeles, but I’m now a member of Royal Belfast. We’re very protective of our courses in Northern Ireland, like Royal County Down and Portrush. As links courses go, Kingsbarns is about as beautiful as it gets.

GD: Now that you’ve played with some tour pros, what’s the biggest difference between your game and the way they play?

Dornan: I’ve watched a lot of big golf events, and those guys are inspirational. I was here at St. Andrews in ’95 when John Daly won the Open and at Carnoustie in ’99 when Jean Van de Velde was having fun in the burn there, and Paul Lawrie took it home. Their dedication—it’s incredible to see up close.

Lewis: These guys repeat, repeat, repeat. They have to work hard to get their swings in a groove, and then when they are, it’s just playing—it’s muscle memory.

GD: Would you give up acting to be a pro golfer?

Dornan: If I could play a professional golfer in a film, that would be cool. Golfers have some life, but it’s similar to what we do, too. You are away a lot, and if you have a family, it’s tricky.