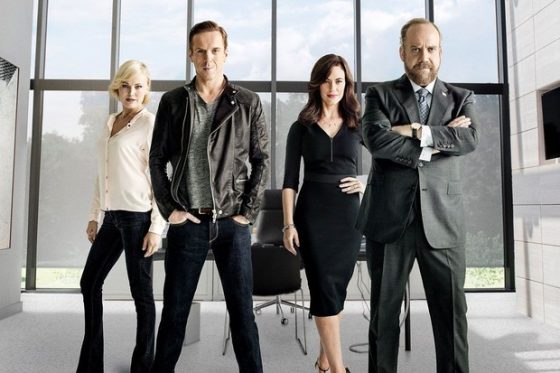 Politics, power and high production values – you could be forgiven for thinking I’m describing the latest series of House of Cards on Netflix. Indeed, if you enjoy the glimpse behind the curtain of how the American elite live, love and lie that the poster child for streaming television offers, then you will love Billions.

Publicly Axe is the personification of the American dream, a generous and charitable self-made man who has overcome adversity (all his colleagues died in the 9/11 attacks) to rise to the top of American business world. Privately, however, he is using insider trading, bullying and bribery to keep his hedge fund way ahead of the pack.

Chuck Rhoades has suspicions that Axe is bent and as a public prosecutor with a passion for high profile takedowns of bad guys begins to become interested in Axe capital and their practices. But – and there’s a quite a big but – Chuck’s wife Wendy (Maggie Siff, best known to many as department store heiress Rachel Katz in Mad Men) is in-house psychiatrist and life coach at Axe Capital and has been friends with Axe for 15 years. When you take into account Wendy earns “eight times” what Chuck takes home and she and her husband enjoy a rather hands-on S&M dominatrix relationship when the lights go out, you have the set up for a very intriguing power struggle.

Made by US premium cable network Showtime (Homeland, Dexter), this is a show that oozes quality from every pore. In look and feel it shares something with recent BBC/AMC co-pro The Night Manager and in atmosphere certainly has notes of Homeland, which is of course reinforced by the main man again being a two-faced Damian Lewis.

From the classy acting to the tight scripts and beautiful photography, Billions quickly takes you inside a world that could easily be boring, but through gripping personal stories and punchy dialogue keeps you hooked even when people are talking in legalese or financialese.

Like all the best dramas (especially of this ilk from America), it creates a world that you want to inhabit. Yes, at times there is melodrama, and the glossy edges are occasionally a tiny bit too bright, but you can forgive any of that because you want to be there; a fly on the wall in the public prosecutor’s office and enjoying the opulent surroundings at the top of the financial pile.

At a time when big business and the uber-wealthy are increasingly under public scrutiny, it is no wonder that this show got commissioned. However, the creators have taken the simple zeitgeist and cleverly woven it into a really interesting show that often sees you gunning for the “dirty” billionaires whilst questioning the motives of those people purporting to uphold the law.

Will this change the way you think about the richest people in our society? Probably not. But will you keep tuning in to find out what happens next? I think so…

Billions begins in the UK on Sky Atlantic on Thursday at 9pm. All episodes are also available on Sky Box Sets

Read the rest of the article at RadioTimes