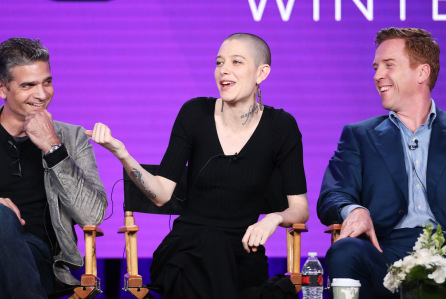 The upcoming run, which will premiere March 25, finds Bobby Axelrod (Lewis) plight to restore his livelihood.

“That was a box that we wanted to put the character in. We had these characters that are super powerful within their worlds,” said Levien. It’s fascinating to us to put them in situations where they become vulnerable or less powerful. It’s a changing landscape. The question is how will Axel react?”

“By the 3rd episode of this season it’s pretty clear that he’s not going to accept that that’s his modern life,” expounded Koppelman. “He’s going to work really hard to change that. We just wanted to take a superhero in a way and put them in a box for which it’s hard for them to escape.”

The said box, however, may not be as hard to break-free. “People go down on this show but they get back up pretty quick,” Lewis teased. “That buoyancy is what makes it so exciting to watch… He has a lieutenant now and they are the avatar of everything that he likes and believes in. He will find a way to come back.”

Siff’s also shared that her character Wendy, continues her complicated relationship with estranged husband Chuck’s and Axe. Said Siff: “The season resumes and she’s back between these two men but in her mind in a very different way and on different terms.”

Read the rest of the original article at Deadline Hollywood