Billions Season 3: Here’s Everything We Know. 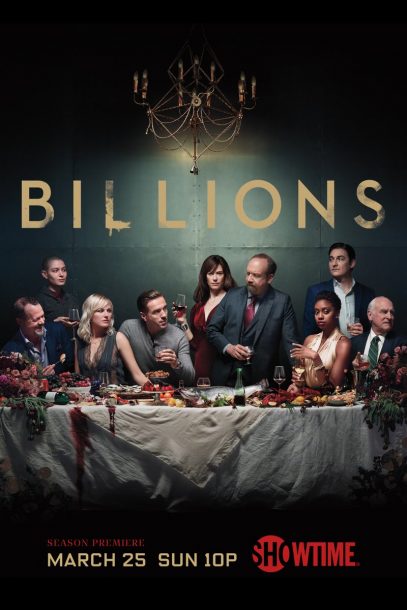 Billions has quietly developed a devoted following over the course of its two seasons on Showtime.  There’s something to be said for quality, and the increasingly vocal Billions fans has helped with the show’s success.

Bobby Axelrod, played by Damian Lewis, is the kind of guy who can’t lead a “normal” life. But that’s exactly what he’ll have to try to do in Billions Season 3. This season will detail Axe’s struggle to regain his livelihood and his financial empire. Easier said than done.

As reported by Deadline, Brian Koppelman divulged, “By the 3rd episode of this season it’s pretty clear that he’s not going to accept that that’s his modern life. He’s going to work really hard to change that. We just wanted to take a superhero in a way and put them in a box for which it’s hard for them to escape.”

“We had these characters that are super powerful within their worlds,” executive producer David Levien said at the TCA press tour. “It’s fascinating to us to put them in situations where they become vulnerable or less powerful. It’s a changing landscape. The question is how will Axe react?”

Not well, one would assume. Will Axe find a way back? Here’s what Damian says about that:

“People go down on this show but they get back up pretty quick,” Damian Lewis said. “That buoyancy is what makes it so exciting to watch… He has a lieutenant now and they are the avatar of everything that he likes and believes in. He will find a way to come back.”

According to Showtime, Axe and Chuck will also “battle for their own survival amid new forces and powerful enemies.”

Comedian Mike Birbiglia will be joining the cast for a guest arc starting in episode four. Birbiglia previously appeared as villain turned whistleblower on Orange is the New Black and should be an interesting fit for the show.

“He’s got this kind of lazy, sort of slightly confused thing about the world,” Lewis said. “(Birbiglia) said ‘how am I going to be on a show where everyone talks so quickly?”

John Malkovich will have a guest role as Russion billionaire Grigor Andolov. Variety writes, “The role is certainly fitting considering that Malkovich previously played a Russian mobster named Teddy KGB in the movie Rounders, which was written by Billions co-creators  David Levien and Brian Koppelman.”

In summation, we have the following clues about Damian’s character Bobby Axelrod in Billions season three:

Clue #1: Axe will struggle to regain his livelihood and his financial empire
Clue #2: By the 3rd episode Axe begins not to accept the cards he’s been dealt
Clue #3: Axe has a lieutenant in Taylor Mason, his avatar
Clue #4: Axe may have a new formidable opponent
Clue #5: Axe will find a way to come back

Read the rest of the original article at Den of Geek!
Secondary Sources: Deadline and Variety