Axelroad and Rhoades Take a Break, Sort Of 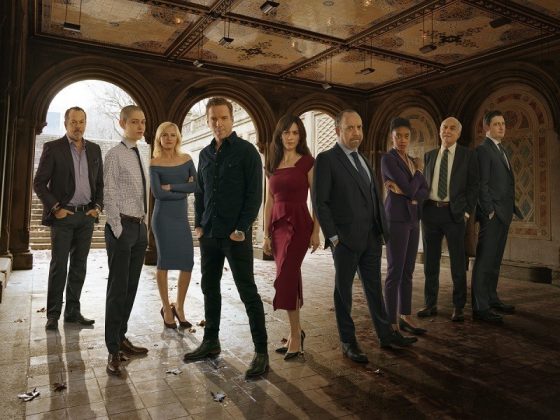 For filmmakers who want to dramatize the finance industry, one of Wall Street’s main appeals is that most people don’t understand how it works. In The Big Short, actress Margot Robbie explains subprime mortgages while sipping champagne in a bubble bath. Other movies—Margin Call and Wall Street come to mind—use fast-talking men in power suits screaming into cell phones to accomplish their exposition.

Typically, very little of the actual mechanics of working in finance ever come into play.  (To be fair, it would be hard to dramatize an earnings call, and to be clear, nobody should try.)
When Showtime’s Billions first aired two years ago, one of its initial draws was that it talked the talk. The story was woven around a surprisingly sophisticated debate about the parameters of insider trading, and the show gave a fairly accurate depiction of a hedge fund’s workplace culture, with analysts and traders and managers and compliance officers. There were even Bloomberg Terminals.
Yes, an improbable drama pitted U.S. Attorney Chuck Rhoades (Paul Giamatti) against high-flying hedge fund manager Bobby Axelrod (Damian Lewis), replete with loaded guns, S&M clubs, and private jets. But the tools, jargon, and  financial mechanisms that entered into the narrative as plot points always brought the show back to the real world.
In Billions’ third season, which will premiere on Sunday, March 25, that verity is occasionally overwhelmed by a labyrinth of interpersonal drama. When the season begins, Rhoades is ascendant. His wife Wendy (Maggie Siff) has come back to him, and his path to the governorship appears to be secure. Axelrod has been indicted, and, after posting bail, holes up in a very large apartment in New York to plot revenge.

The show’s creators wisely seem to have decided that the mano-a-mano grudge match between Rhoades and Axelrod has run its course, at least for the first five episodes provided for review. Instead, characters from the supporting cast—most notably Taylor, the gender-neutral math whiz played by the excellent Asia Kate Dillon—take the spotlight.

With the exception of a slightly uncomfortable altercation in a steam room, the novelty of Taylor’s non-binary gender has been left in the dust of last season, and they emerge as a full-fledged character with a singular plot line.

Taylor has been appointed chief investment officer of Axelrod’s firm, Axe Capital. Axelrod, though, isn’t out of the picture. He’s just behind the scenes, leaving Taylor torn between running a multibillion-dollar fund and playing interference with its nominal boss. (This is Taylor’s firm, but it’s still Axelrod’s money.)

The show, meanwhile, manages to include a dizzying amount of “insider” signaling to those in the know. We see artwork by Ellsworth Kelly, Jasper Johns, John Baldessari, Pablo Picasso, and Robert Motherwell spread across apartments and office suites.

And then there are the locations. It’s as if Billions picked up where Sex and the City left off: Characters have milkshakes at the Vaselka Diner, go to the Russian and Turkish Baths in the East Village, play ping pong at Wang Chen’s Table Tennis Club on the Upper West Side, and munch on bialys at Kossar’s on the Lower East Side. New York’s fine-dining establishments are also checked off: We see action in Daniel, at which the restaurant’s real-life owner Daniel Boulud makes a slightly awkward cameo. Can a Billions tour bus be far behind?

There are also moments—perhaps too many for comfort—where the show turns its back on plausibility. An entire episode is devoted to whether or not Axe Capital employees can stomach quants in the office, as if they’d never heard of James Simons’s Renaissance Technologies, or read Flash Boys. “First it makes things better for you. Then it destroys you,” says one of Axe Capitals ostensibly cut-throat traders, of trading algorithms. “This is how computers take over the world.”

There’s also an ongoing plot line that involves a “counter-intel team” hired by Axelrod, which manages to launder money and hack into the network of the U.S. Immigration and Customs Enforcement agency’s database to alter the subject of a raid.

And while the de-emphasis on the battle between Rhoades and Axelrod is welcome, the sheer number of subplots that take its place can feel almost Dickensian, as if everyone in Bleak House were given a Maybach and a trading portfolio.

Read the rest of the original article at Bloomberg