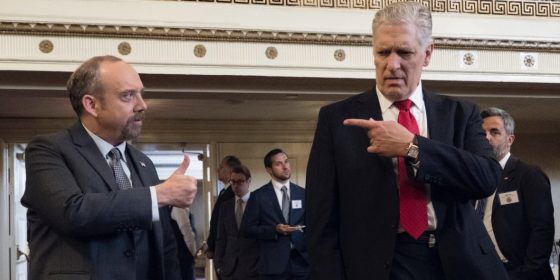 The central conflict of Showtime’s Billions lies in the battle between Bobby ‘Axe’ Axelrod and Chuck Rhoades, but the series is admittedly limited in how far it can take that struggle without undoing the tension that essentially fuels the show’s drama. Thankfully, and much to the enjoyment of those who love the show for reasons that go well beyond the financial cat-and-mouse game played by its two leads, the series has proven adept at creating situations outside the Axe-Chuck conflict to keep things entertaining. Over the past two seasons, the show has demonstrated a willingness to become outrageous and, when coupled with some surprisingly hilarious dialogue — often delivered by David Costabile’s irascible Mike ‘Wags’ Wagner, but not exclusively so, as demonstrated by the brilliant “where we’re going, we need Rhoades” line Chuck offered up last season — those ingredients have effectively come to define Billions.

It seems rare that a show can step outside its basic conceit to become something else entirely, while still keeping that initial notion simmering away in the background. The grudge match between Axe and Chuck is a terrific framework for the series, but as Billions has moved on, it’s become a series that’s much more interested in behavior and motivation and all the things — underhanded and otherwise — people are willing to do in order to get ahead, get what they feel they deserve, and in many cases, get something before the other guy does just to force them to do without. That is a tougher sell than “Paul Giamatti and Damian Lewis try to destroy one another with billions of dollars at stake” so that’s what we are left with, a series that revels in turning its characters’ bad behavior into top-notch drama that’s also sneakily hilarious.

Season 2 certainly set a high bar in terms of where the series was willing to go and its ability to make the audience laugh. As such, season 3 has its work cut out for it, but the premiere ‘Tie Goes to the Runner’ steps up and delivers an assured opening that upsets the balance of things in compelling ways. Both Axe and Chuck are alpha males in a proverbial pissing contest with one another. They’ve both acted recklessly in an attempt to damage the other, and so season 3 has them reaping the whirlwind as it were. Basically, Axe and Chuck find themselves on the fringes of a situation they were once in full control of.

Axe is still stinging from his arrest at the end of season 2, which was only made possible by Chuck burning two of the most important bridges in his personal life and putting his father Charles (Jeffrey DeMunn) and friend Ira Schimer (Ben Shenkman) on the brink of financial ruin. Axe has relocated to a luxury apartment in the city as his marriage to Laura (Malin Åkerman) falls apart. Meanwhile, Chuck and Wendy (Maggie Siff) appear stronger than ever, even diving back into some of their more distinctive habits, ostensibly re-opening old wounds in order to better mend them.

‘Tie Goes to the Runner’ is more ambitious than simply getting caught up with where the characters are in the wake of last season’s finale; it’s interested in showing how those changes will effect the characters moving forward. And as the series is often very good at demonstrating, Axe and Chuck’s new circumstances find ways of mirroring one another in interesting ways. At the start of season 3, the long and short of it is that both men are on the outside looking in; they’ve conceded some semblance of control in order to mitigate the potential consequences of their actions. Axe has handed over the business of running Axe Capital to Taylor (Asia Kate Dillon), while Chuck’s dealings put Oliver Dake (Christopher Denham) in a newfound position of power — albeit one that is still beholden to Chuck and more or less opens the door for him to pursue New York’s governorship.

But there are new obstacles in the way to make things interesting. Some, like the freezing of Axe Capital’s assets are temporary, while others, like the new conservative good ol’ boy Attorney General Waylon “Jock” Jeffcoat — because it just wouldn’t be Billions without a character having a ridiculously awesome nickname in quotes — feel frighteningly more permanent. Jeffcoat is appointed as part of the new administration, one that,unsurprisingly, wants Chuck to take it easy on white-collar criminals to turn up the heat on cases that will thrill their minority-fearing voting base.